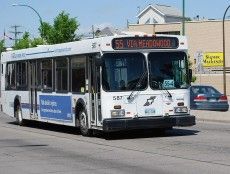 Denise Campbell of Winnipeg, Manitoba, saw some odd behavior in a public bus driver, and thought it was worth passing on to the community online forum. The driver pulled over at a corner that had no bus stop and got out. The passengers, many of whom took the same bus every day, were puzzled. The driver walked over to talk to a man who looked to be homeless. He was barefooted.

I first thought the driver was going to offer the man a ride until our driver took off his own shoes and gave them to the man on the sidewalk.

That is when I realized that the man the driver was chatting with was barefoot.  The bus was dead silent.  I think we were all stunned and speechless.  As we proceeded to our next stop, one of the passengers got up and said to the driver, that was the most amazing thing she had ever seen; and then she asked him, why did he do that?

The bus driver answered because he couldn’t stand the thought of that poor man walking without shoes.   Wow!  No judgement; it was just, “Here buddy you need these more than I do.”