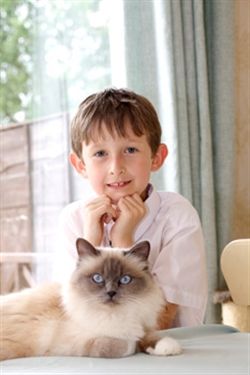 The British feline charity Cats Protection named Jessi-Cat, from Davyhulme, Greater Manchester, their Cat of the Year. Jessi-Cat’s owner, 7-year-old Lorcan Dillon, has an anxiety disorder called selective mutism, which makes it difficult for the youngester to express himself. Jessi-Cat was just the therapy he needed, and Lorcan has learned to express himself to the cuddly cat.

Cat lover Rick said: “All three cats have been a huge support to their owners, but Jessi-Cat is my winner. The bond between Jessi-Cat and Lorcan is incredible and it has clearly had a hugely positive impact on Lorcan’s home and school life. Jessi-Cat helps Lorcan to communicate and express emotions that ordinarily Lorcan wouldn’t be able to do.”

Lorcan and his mum Jayne Dillon, 44, of Davyhulme, Greater Manchester, were at the awards ceremony to accept Jessi-Cat's prizes – a star shaped trophy, three months’ supply of cat food, a year's supply of Verdo Cat Litter and a framed photograph of Jessi-Cat.

Awards were bestowed in other “cat”-egories, such as Hero Cat and Rescue Cat. The award for Celebrity Cat, chosen by an internet poll, was Simon’s Cat, Simon Tofield’s animated pet. Read about all the awards at the Cat’s Protection website. Link -via Arbroath