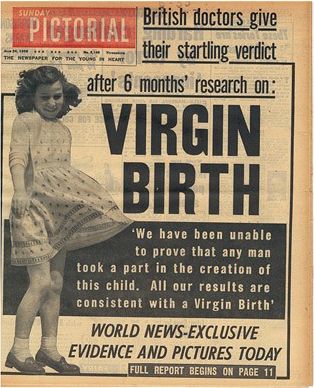 In 1955, geneticist Helen Spurway discovered the phenomenon known as parthenogenisis: how some species procreate without a male. Spurway was studying guppies, but wanted to know if parthenogenisis, or “virgin birth,” happened in humans. A call went out through the British magazine Sunday Pictoral to find possible cases. They found Emmimarie Jones, who had an 11-year-old daughter named Monica with no known father. Tests available at the time showed that Monica had many genetic traits eerily identical to her mother’s, except for a skin transplant, which both mother and daughter eventually rejected.

Eight months after the search for a virgin mother had been announced, the Pictorial published a world exclusive on Emmimarie and her daughter. The full details of their tests were also revealed in The Lancet, which published “Parthenogenesis in Human Beings” by Dr Stanley Balfour-Lynn of Queen Charlotte’s Hospital in London. On the skin grafts, The Lancet concluded that they indicated that Monica’s genes did not in fact match her mother’s, despite all the previous evidence to the contrary. Yet there was a scientific curiosity here. What any parthenogenetically conceived child certainly could not have, unless they had mutated, were any genes that had not come from the mother in the first place. This is why the skin graft from a virgin-born child would be expected to take when implanted on her mother, but one from the mother would not necessarily take on her child. Yet, the opposite had happened in Emmimarie and Monica’s test. What on earth was going on?

In such a case, Balfour-Lynn wrote, interpretation was very difficult, making rigorous proof impossible. True, the Joneses had failed the most stringent test, but that didn’t negate the validity of the first three; it only muddied the waters. The study concluded that Emmimarie’s claim that her daughter was fatherless must be taken seriously. “Doctors have been unable to prove that any man took part in the creation of this child”, screamed the Sunday Pictorial.

But modern DNA tests were not around in 1956, and no DNA samples from the women exist now. However, subsequence advances in science throw doubt on Emmimarie’s story. Read the explanation at the Telegraph. Link -via Not Exactly Rocket Science