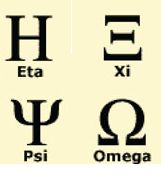 The Pageant of Letters was a Greek comedy about the alphabet from about 400 BCE. The premise of the play was that four new letters (eta, xi, psi, and omega) were being added to the Greek alphabet, and some folks were resistant to the change, others embraced it with varying degrees of success, and some were just totally confused. In other words, it was a slapstick comedy of errors.

One particular gag from the comedy survives and seems to come from the rapid-fire episodes ( similar to our “black-out sketches”) that came near the end of these comedies. A woman (character name unknown) is pregnant and about to deliver. She is using the new letters in her words and is trying to convey to a second figure (name and occupation unknown) that she is in labor. The second figure is failing to understand what she is saying because they haven’t mastered the new letters yet. ( Obviously the situation is just a wild exaggeration for comic effect) The second figure eventually thinks the woman is trying to convey the information that she is about to express flatulence instead and immediately flees the scene. Ah, fart jokes! No matter what the time period they appeal to the ten year old child in all of us!

Read more about this ancient comedy at Balladeer’s Blog. Link