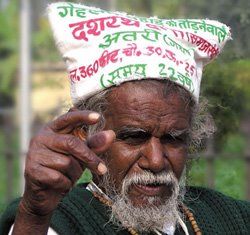 Dashrath Manjhi lived in the little village of Gahlour, Bihar, India. The nearest medical facility was in Gaya, which was only about 8 km away as the crow flies, but 50 km away by road due to a mountain. Manjhi’s wife, Falguni Devi, was injured in the 1950s, and died on the long route to the hospital. Manjhi (and his neighbors) were of low caste and therefore the village was low on the government’s priority list for road building. So in honor of his late wife, Manjhi took it upon himself in 1959 to cut through the mountain to provide medical access to his village. By himself. With hand tools.

He knew his voice will not create any reaction in the deaf ear of the government; therefore, Dashrath chose to accomplish this Herculean task alone. He sold his goats to purchase chisel, rope and a hammer. People would call him mad and eccentric spirited with no idea of his plans. Unfazed by his critics’ discouraging remarks, Dashrath hammered consistently for 22 long years to shorten the distance from 50km to 10km between Atri and Wazirganj. The day came when he stepped through a flat passage — about one-km long and 16-feet wide — to his dream, ‘the other side of the hill’.

Manjhi became famous for his accomplishment, and was given a state funeral upon his death in 2007. He was also the subject of a movie. However, Manjhi’s family is still impoverished and the road he cut is still unpaved. Link -via Metafilter, where’ll you’ll find additional links.