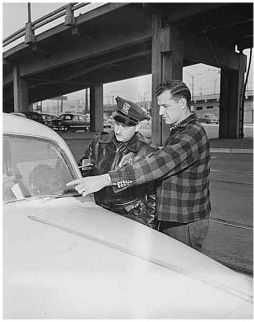 The following is an article from Uncle John’s Slightly Irregular Bathroom Reader.

One of Uncle John’s favorite movies is the 1956 classic Invasion of the Body Snatchers. So imagine his horror (and delight) when he found this article by Alan J. Stein about an incident that occurred in Washington in 1954. Stein’s account, which appeared in Seattle’s History Ink, is remarkably similar to the movie plot. The only difference: this one really happened.

The strange phenomena started in late March, 1954, when tiny pits in automobile windshields were first reported to the police in the northwestern Washington community of Bellingham. The small size of the pits led police to believe that the damage had been the work of vandals using buckshot or BBs. Then, within a week, a few residents in Sedro Wooley and Mount Vernon, 25 miles south of Bellingham, also began noticing damage to their windshields. By the second week of April, the “vandals” had attacked further south in the town of Anacortes on Fidalgo Island. Losing no time, all available law enforcement officers in the area sped to town in the hope of apprehending the culprits. Road blocks were set up south of town, and all cars leaving or entering the city were given a detailed once-over, as were their drivers and passengers.

Farther south, cars at the Whidbey Island Naval Air Station in Oak Harbor were discovered to have the same mysterious dings. Nearly 75 Marines made an intensive five-hour search of the station looking for evidence -anything that might lead to the source of the mystery. They came up empty, yet by the end of the day, more than 2,000 cars from Bellingham to Oak Harbor were reported as having been damaged.

Two thing became abundantly clear: This could not be the work of roving hooligans; and whatever was causing windshield pits and dings was rapidly approaching Seattle. 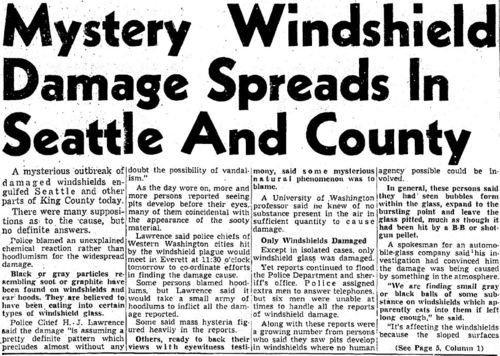 On the morning of April 14, Seattle newspapers ran front-page reports of the events that had transpired to the north. The afternoon papers carried similar stories. At 6 PM a report cam in to the Seattle police that three cars had been damaged in a lot at 6th Avenue and John Street. At 9 PM a motorist reported that his windshield had been hit at North 82nd Street. Then the floodgates opened.

Motorists began stopping police cars on the street to report windshield damage. Parking lots and auto sale lots were hit. Even police cars parked in front of precinct stations suffered damage. Extra clerks were brought into the station to answer the flurry of calls from angry and perplexed car owners. By the next morning, windshield pitting had reached epidemic levels. 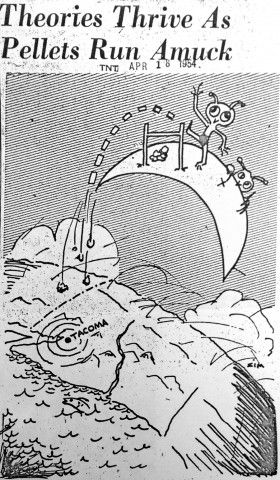 The sheer numbers of the damaged windshields ruled out hoodlums, and experts couldn’t explain the strange pits and holes appearing out of nowhere. On Whidbey Island, Sheriff Tom Clark postulated that radioactivity released by recent H-bomb tests in the South Pacific was peppering windshields. Geiger counters were run over windshield glass, but all were free of radioactivity. Still, the sheriff held firm that “no human agency” could have created the scars on the glass. Other theories abounded:

* Some thought that the Navy’s new million-watt radio transmitter at Jim Creek near Arlington was converting electronic oscillations to physical oscillations in the glass. Navy Commander George Warren called this theory “completely absurd.”

* Cosmic rays bombarding the Earth from the sun were considered, but since so little was known about cosmic rays, this theory could be neither proved nor refuted.

* A mysterious atmospheric event was theorized (although no one could explain exactly what kind that would be).

* A few people reported seeing the glass bubble right before their eyes, leading some to postulate that sand-flea eggs had somehow been laid in the glass and were now hatching.

By April 15, 1954, police were swamped with calls. Close to 3,000 windshields had been reported as being pitted, and no one knew what to do. Desperate, Seattle Mayor Allan Pomeroy first wired Washington Governor Langlie, then President Eisenhower.

What appeared to be a localized outbreak of vandalism in damaged auto windshields and windows in northern Washington State has now spread through the Puget Sound area. Chemical analysis of mysterious powder adhering to damaged windshields and windows indicates the material may simply be spread by wind and not a police matter at all. Urge appropriate agencies be instructed to cooperate with local authorities on emergency basis.

Governor Langlie contacted the University of Washington asking a committee of scientists to investigate the phenomenon. The experts (from the environmental research laboratory, the applied physics laboratory, and the chemistry, physics, and meteorology departments) did a quick survey of 84 cars on campus. They found the damage to be “overly emphasized,” and most likely “the result of normal driving conditions in which small objects strike the windshields of cars.” The fact that most cars were pitted in the front and not the back lent credence to their theory.

“Tommyrot!” remarked Dr. D. M. Ritter, a U. of W. chemist, after inspecting windshields and residue found on some of the cars. “There isn’t anything I know of that could be causing any unusual breaks in windshields. These people must be dreaming.”

King County Sheriff Harlan Callahan disagreed. His deputies examined 15,000 cars throughout the county, and found damage to more than 3,000 of them. The sheriff and his deputies felt that this level of damage could not be explained by ordinary road use. They also claimed they’d found odd little pellets near some of the cars, and that the pellets reacted “violently” when a lead pencil was placed next to them. (Nobody knows what this meant, though.) 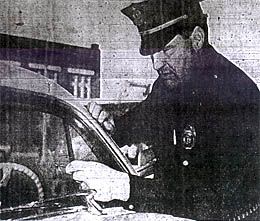 But further investigation by the Seattle Police Department disproved the deputies’ claims. The police determined that most of the dings pitted the windshields of older cars. In cases were auto lots were involved, brand new cars were unpitted; used cars were.

Although there were a few rare instances of “copycat” vandalism, most of the cases had a simple explanation: The pits had been there all along -only no one had noticed them until now.

The same reasoning applied to particulate matter found on windshield glass and near cars. It wasn’t radioactive debris, it was coal dust. These tiny particles had been drifting through Seattle’s air for years, only no one had ever looked closely at them before. And although the coal dust particles had nothing to do with the pitting, the populace at large finally noticed them -just as they noticed the window dings- for the very first time. Sergeant Max Allison of the Seattle Police crime laboratory declared that all the damage reports were “5 percent hoodlum-ism, and 95 percent public hysteria.” Puget Sound residents had become participants in a collective delusion.

ONE FOR THE BOOKS

The Seattle Windshield Pitting Epidemic of 1954 became a textbook example of collective delusion, sometimes referred to as “mass hysteria.” To this day, sociologists and psychologists refer to the incident in their courses and writings alongside similar events, such as Orson Welles’ War of the Worlds Martian invasion panic of 1938, and sightings of the “Jersey Devil” in 1909.

The Seattle pitting incident has all the key factors, including ambiguity, the spread of rumors and false but plausible beliefs, mass media influence, recent geopolitical events, and the reinforcement of false beliefs by authority figures (in this case, the police, military, and political figures). This combination of factors -added to the simple fact that for the first time people actually looked at their windshields instead of through them- caused the hubbub. No vandals. No atomic fallout. No sand fleas. No cosmic rays. No electronic oscillations. Just a bunch of window dings that were there from the start.

You probably have them on your car right now …but please don’t alert the media or your local police. 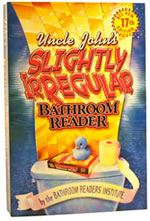 The article above is reprinted with permission from Uncle John’s Slightly Irregular Bathroom Reader, a fantastic book by the Bathroom Readers’ Institute. The 17th book in this the Bathroom Reader series is filled to the brim with facts, fun, and fascination, including articles about the Origin of Kung Fu, How to Kill a Zombie, Women in Space and more!