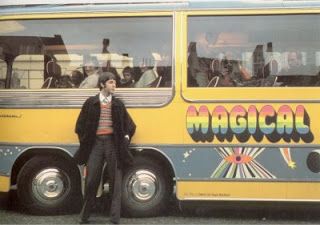 In 1967, the Beatles filmed their only made-for-TV movie. It was called Magical Mystery Tour. The film itself is an interesting, checkered, odd little movie directed and edited by the Beatles themselves. It was, basically, the boys riding around in the country on a Magical Mystery Tour bus with an eclectic group of characters. They just rode around and filmed whatever random adventures they got into.

It also features a few sketches written by the Beatles themselves. It is a crazy quilt pastiche, but it does feature some excellent pre-MTV Beatles videos, including John singing “I am the Walrus” and George singing “Blue Jay Way.” The film was a huge flop when it was first shown on TV -the Beatles first unqualified failure.

The Beatles, their wives (and Paul’s current girlfriend, Jane Asher), the staff of their Apple organization, various friends and family members attended. The invitation read “Magical Mystery Tour Fancy Dress Party.” In other words, it was a costume party.

The costumes the Beatles and their mates showed up in were quite fascinating. John Lennon came as a fifties-type rocker, complete with greased-up hair and leather jacket, a la early Elvis. His then-wife Cynthia came as a Victorian lady. 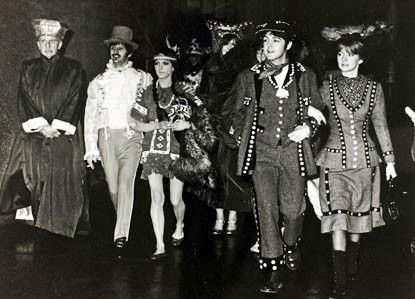 Paul came as “the Pearly King” and Jane Asher was “the Pearly Queen.” Ringo was a regency chap and his wife Maureen was an Indian maiden. George came as a dashing Errol Flynn-type swashbuckler. And last, but certainly not least, George’s wife, Patti, came as an “Eastern princess.” In the vernacular, Patti was dressed in a very skimpy, veiled costume as a belly dancer. 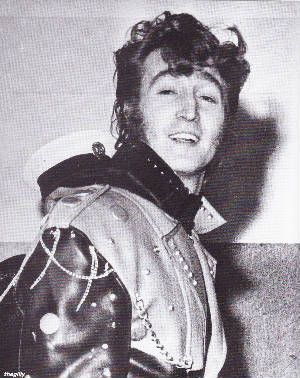 A pleasant time was being has by all, but John Lennon had, shall we say, a few too many. Lennon was, by all accounts, a terrible drunk, and on this night, John was chugging them down.

Patti Harrison, an ex-model, is usually acknowledged as the most beautiful of all the Beatle wives. Patti, like many women at costume and Halloween parties, went all out and was dressed up in an incredibly sexy, revealing outfit and John Lennon was “all-eyes.” Accounts of the party say John was leering, ogling, and flirting with Patti from the word go. It became a bit embarrassing.

Another attendee at the party was 19-year-old singer/actress Lulu. Lulu had recently made a splash in the movie To Sir With Love, and she had a hit record with the title song. Lulu was a friend of the Beatles and she came dressed as a Shirley Temple-type little girl, complete with a curly blond wig and a huge lollipop. 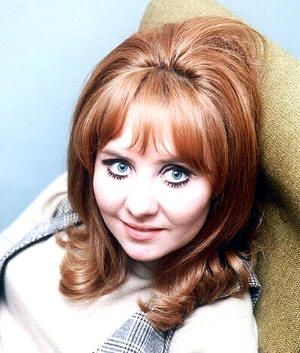 After hours of watching John ignore his wife and drool over Patti Harrison, Lulu got fed up and finally let loose. As John was sitting, Lulu stood over him and gave him a very severe scolding, right in front of everyone. Incredibly, John Lennon, who feared no man (or woman) just sat there, timidly, and let Lulu berate him.

“How dare you ignore Cyn? How dare you stare at Patti like that right in front of your wife?” The exact words Lulu used are not recorded, but they are very easy to imagine.

Cynthia was to write about the strange, unprecedented incident in her autobiography. Cyn said that she would never forget the sight of Lulu, holding a big lollipop, bawling out her tough, macho husband. John sat quietly and contritely, with his head down, like a little boy being scolded by his mother.

No photographs survive documenting this surreal incident, but there are a few scattered photos from the Magical Mystery Tour party itself. The most famous one is of John, holding a glass of wine, along with Paul and Ringo and their mates. Oddly, three of the night’s four main characters are not featured in the picture. George, Patti, and Cynthia are nowhere to be seen. 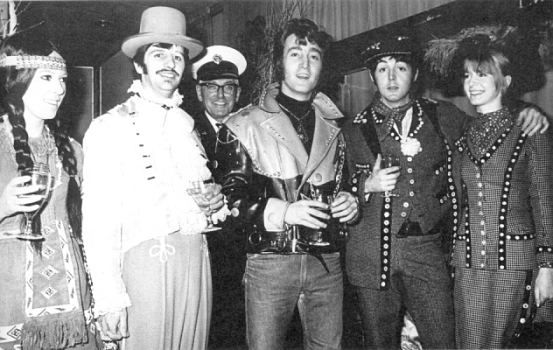 One can surmise George and Patti may have left the party early. Or maybe they just stayed away from John for the remainder of the night. Ditto for John’s poor wife Cynthia.