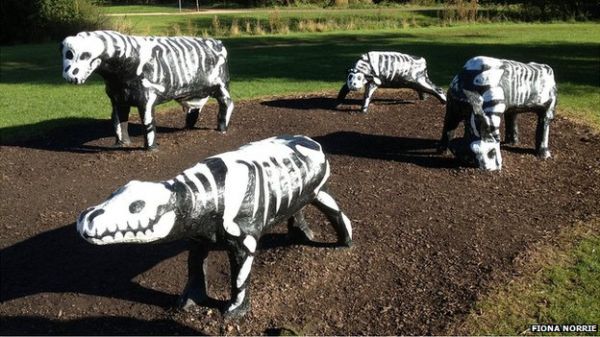 Concrete cows have been a familiar sight in a Bancroft park in Milton Keynes, England, since 1978. Since then, the sculptures have been stolen, beheaded, and painted in various fashions, including once having pajamas painted on. But a recent prank that left the bovines painted with skeletons may be the last straw. Officials are considering removing the cows permanently.

Bryony Serginson, The Parks Trust’s head of community engagement, said: “We’d rather they stayed where they were – that’s where they live and people see them and associate them with that particular park.

“But in the long term if they do continue to be vandalised, then we might have to consider that.

“We are taking it seriously as an act of vandalism. It’s going to be costly to us to get the cows back into the proper state that they should be in.

Not everyone took offense at the latest act of vandalism.