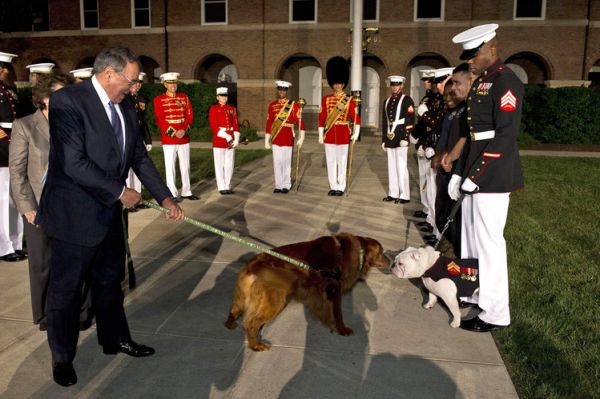 Chesty XIII* is an enlisted bulldog in the United States Marine Corps and that force's official mascot. His recent promotion from corporal to sergeant was almost aborted after Chesty angrily confronted a golden retriever owned by the Secretary of Defense. It was a major breach of protocol that, according to some Marines, indicated that Chesty wasn't ready to become a sergeant:

Other senior Marines worried about the message promoting Chesty might send. In military chain of command, Bravo is second only to Bo Obama, the president’s hypoallergenic Portuguese water dog. The Constitution puts the military under civilian control, and some senior officers thought promoting Chesty might appear insubordinate.

“The standards in the barracks had lowered,” said one senior Marine officer. “The dog didn’t really deserve it.”

Col. Montanus, who had the dog’s fate in his hands, acknowledges that Chesty was wrong to shove his short snout in Bravo’s face. “There absolutely was a protocol break,” he said. “We don’t bark at guests, whether they are human or the canine variety.”

Link -via Joe Carter | Photo: Erin A. Kirk-Cuomo/Department of Defense