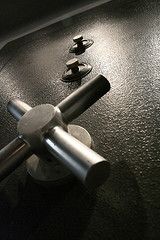 I sympathize with his frustration. There’s no build-up to Columbus Day, so one might not expect banks to be closed. According to police in East Boston, Massachussets, a would-be bank robber was ready to conduct business on Monday. But he couldn’t get inside the building. The suspect:

[…] was spotted by a passing officer at the bank entrance wearing blue latex gloves, sunglasses and a hat. Leger was allegedly trying to open the locked door.

When officers searched him they found a note that read, “Give Me All The Money. No Dye Pack.”

Police say Leger also had a pillow case with him.