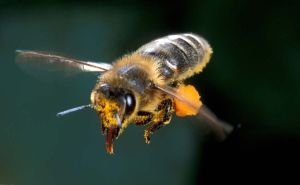 Honeybees in a hive have fairly identical genes. The queen is the mother, a very few drones are the fathers, and those drones are closely related to each other anyway. But “epigenetic” changes in the DNA, those that switch genes on or off chemically, differ among bees that do different jobs. And bees can change those chemical switches themselves, when needed. Under normal circumstances, young worker bees are nurses in the hive, and turn into foragers as they age, when a chemical changes which genes are expressed. Scientists can track those changes by the amount and pattern of methyl (CH3) molecules in their DNA.

Led by Andrew Feinberg of Johns Hopkins University in Baltimore, Maryland, and Gro Amdam of Arizona State University in Tempe, the researchers coaxed forager bees back into nursing roles by removing all the nurses from the hive while the foragers were out looking for pollen. When the foragers returned, they noticed the lack of nurses, and about half of them took on nursing roles. Examination of the methylation patterns in DNA from their brain cells showed that these too had switched back to the pattern associated with nurses.

Gene Robinson, a bee researcher at the University of Illinois at Urbana-Champaign, who was not involved in the research, says that although the paper does not necessarily prove that epigenetic mechanisms cause behavioural differences, “it demonstrates for the first time that if behaviour is reversible so is the methylation”.

Further research may determine exactly what triggers the correllation. Link -via Metafilter