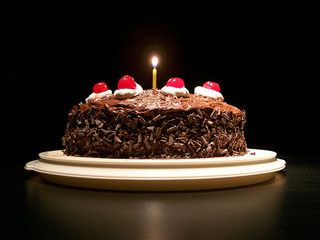 You have to feel sorry for redditor MechaArif. He had a birthday with a party and a nine-year-old ate the entire birthday cake.

It was my birthday and my friends and family were over, which included my distant cousin and her 9 year old overweight son. We just got done with the pizza and were about to go eat the cake when we walk in on the 9 year old (who i’ll call Jake). Jake had eaten all the cake and had frosting on his hands and around his mouth. Of course right then Jake’s mom comes in and says stuff like “It’s not his fault” and “why is the cake out anyway?”. Right then I told her “Get out, NOW.” and she said that she wouldn’t because AND I QUOTE, “It’s not ONLY your birthday MechaArif, it’s all of ours too.” after that my mom stepped in and told her she needed to leave. Luckily we had a second cake and ate that instead. Unluckily for me it had no frosting, but unluckily for her she’s not getting any Christmas presents. So here I am after my party, venting this on Reddit.

His story is the first in a huge thread where he invited people to tell the stories of parents who defended the most outrageous behavior from their children. After reading some of the stories (reading them all would take quite a while), tell us if there have been anything similar in your experience. I can’t recall any parent ever defending a child’s bad behavior to me, but then I haven’t worked among the public in many years. Link