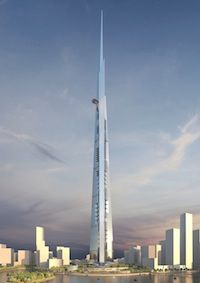 The Burj Khalifa in Dubai may be the world’s tallest building, but not for long. China and Saudi Arabia already have plans to build taller skyscrapers. How long can this go on? Is there a physical limit to how high you can build a tower? Architect Tim Johnson of the Council on Tall Buildings and Urban Habitat thinks the only real limits are practicality and money, as engineers can always find a way around physical limits.

For a Middle East-based client he’s not allowed to identify, Johnson worked on a project back in the late 2000s designing a building that would have been a mile-and-a-half tall, with 500 stories. Somewhat of a theoretical practice, the design team identified between 8 and 10 inventions that would have had to take place to build a building that tall. Not innovations, Johnson says, but inventions, as in completely new technologies and materials. “One of the client’s requirements was to push human ingenuity,” he says. Consider them pushed.

With those inventions and the hollow, Eiffel Tower-like base, Johnson says the design could have worked. The project was canned as a result of the crash of the real estate market in the late 2000s (and probably at least a little good old-fashioned pragmatism). But if things were to change, that building could be built, he says.

"We proved that it is physically and even programmatically possible to build a building a mile-and-a-half tall. If somebody would have said 'Do it two miles,' we probably could have done that, too," Johnson says. "A lot of it comes down to money. Who’s going to have that kind of capital?"

Other architects, engineers, and planners share their opinions on the limits of construction at the Atlantic. Link -via the Presurfer