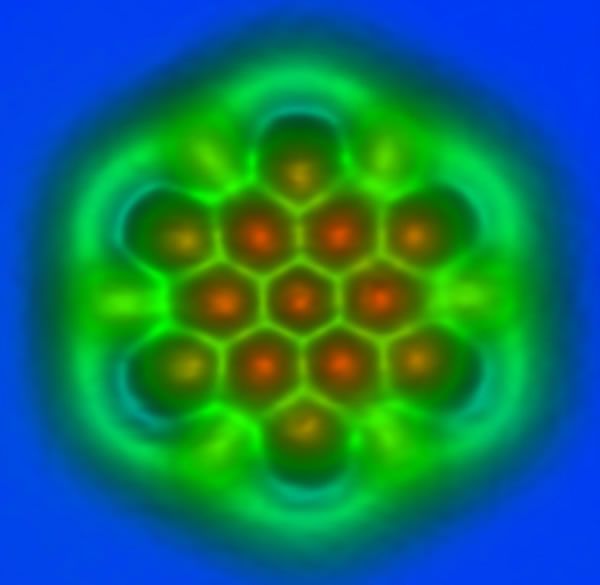 IBM scientists in Zurich, Switzerland, who captured the first
close-up image of a single molecule (a pentacene back
in 2009), and the charge
distribution of a single molecule, has scored another scientific first:
they were able to distinguish chemical bonds in individual molecules using
noncontact atomic force microscopy.

"We found two different contrast mechanisms to distinguish bonds.
The first one is based on small differences in the force measured above
the bonds. We expected this kind of contrast but it was a challenge
to resolve," said IBM scientist Leo Gross. "The second contrast
mechanism really came as a surprise: Bonds appeared with different lengths
in AFM measurements. With the help of ab initio calculations we found
that the tilting of the carbon monoxide molecule at the tip apex is
the cause of this contrast." […]

The individual bonds between carbon atoms in such molecules differ
subtly in their length and strength. All the important chemical, electronic,
and optical properties of such molecules are related to the differences
of bonds in the polyaromatic systems. Now, for the first time, these
differences were detected for both individual molecules and bonds. This
can increase basic understanding at the level of individual molecules,
important for research on novel electronic devices, organic solar cells,
and organic light-emitting diodes (OLEDs). In particular, the relaxation
of bonds around defects in graphene as well as the changing of bonds
in chemical reactions and in excited states could potentially be studied.