Neatorama presents a guest post from actor, comedian, and voiceover artist Eddie Deezen. Visit Eddie at his website. Note: if you haven’t seen the film Goldfinger, this post contains spoilers. 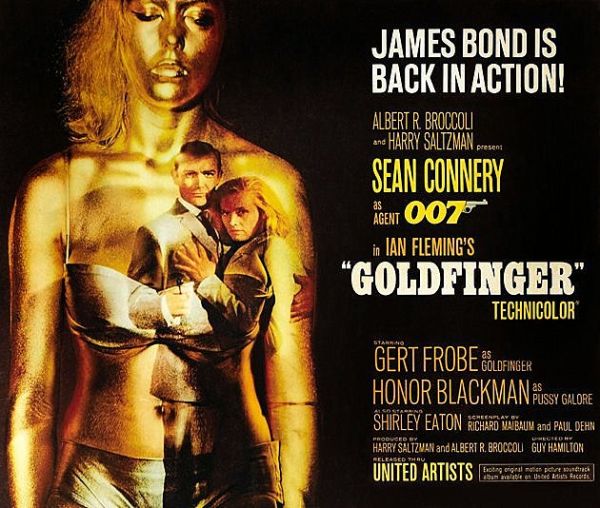 Ask almost any James Bond fan to name his or her favorite Bond film, and chances are they’ll reply with Goldfinger. Steven Spielberg has called it his favorite Bond film. Goldfinger is also quite probably the most widely seen of any Bond movie. According to one source, 75% of worldwide moviegoers have seen Goldfinger at least once. Goldfinger seems to be the quintessential Bond film.

It was the start of the modern James Bond film formula as we know it, complete with the genesis of the unusual gadgets Bond was to use in pretty much every succeeding film following Goldfinger. It was the first Bond film to have the classic Q-branch gadget testing workshop scene that became a Bond staple. It also features the classic Bond car: the Aston-Martin DB-5. Sales of the Aston-Martin DB-5 increased 50% after the release of Goldfinger. 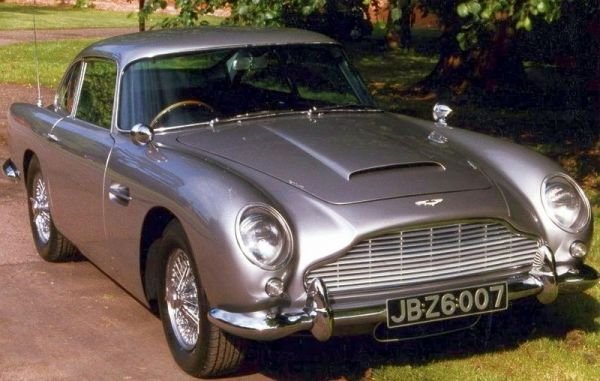 Sean Connery, in his third outing as 007, seems really in his prime here. During Goldfinger, Connery was actually married to actress Diane Cilento, but since he is playing a freewheeling ladies man, he wore a flesh-colored bandage over his wedding ring (clearly visible in production stills). 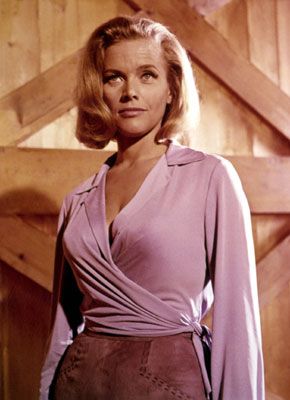 As in every James Bond film, there is a knockout Bond girl. In this case it Honor Blackman, actually the oldest Bond girl in history -a decrepit 37 years of age at the time of filming. Honor took on the unforgettable role of Pussy Galore. One can only wonder how hard it must have been to get that one by the 1964 censors! The introduction scene between Bond and Miss Galore was originally written as:

BOND: I know, but what’s your name?

This racy dialogue proved too much to be accepted and was changed to:

BOND: I must be dreaming.

By the way, take a quick look at Galore’s all-girl flying circus in the film- some were actually men wearing wigs. 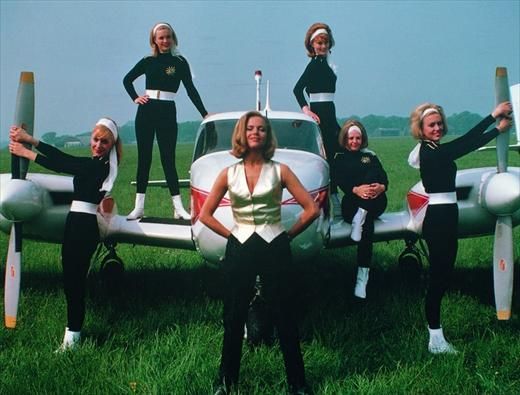 The title role of Auric Goldfingerwas played with unforgettable panache by Gert Frobe. Frobe was a former member of the Nazi party before and during World War II. As a result of this, Goldfinger was originally banned from Israel. The truth was, Frobe had risked his life by hiding Jewish families from the Gestapo during his Nazi days. After a Jewish family came forth to publicly thank Frobe, the Israeli ban was officially lifted. 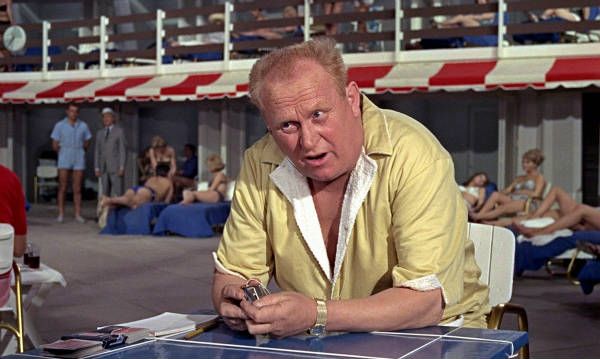 Interestingly, Frobe did not speak much English. He tried to recite his role phonetically, but it was unacceptable. As a result, the entire speaking role of Goldfinger was dubbed in by an actor named Michael Collins. 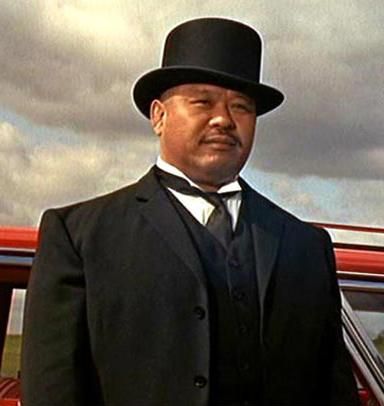 Goldfinger’s loyal henchman, Oddjob, is played by professional wrestler Harold Sakata. In a fight scene with Sean Connery in the film, Sakata chopped him with a too-real karate chop and Connery walked off the set, claiming real injury. It is rumored that Connery used this work-related injury to get a raise in pay for his next Bond movie Thunderball.

In Sakata’s death scene, he is electrocuted by an electric wall. In filming the scene, Sakata refused to let go of the wall when the director told him to, and he sustained severe burns.

The film’s classic theme song was rendered by Shirley Bassey and was the first Bond theme to crack the top ten on the pop music charts (it peaked at #8). This proved to be the first time a movie’s title song was played over the the film’s opening credits. 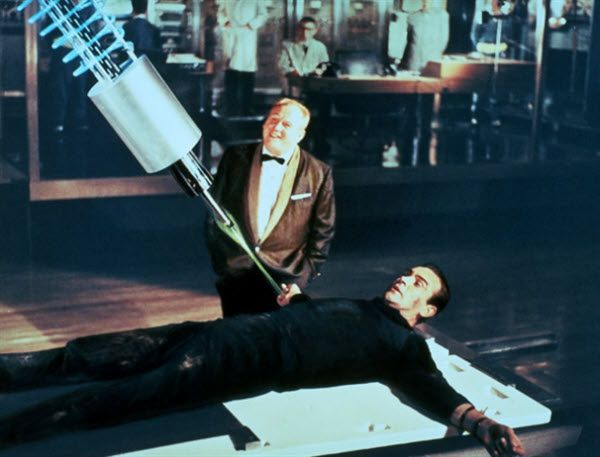 Another first: the unforgettable scene where Bond is tied to a table and a laser beam is slowly moving to cut him in half as Goldfinger looks on impassively was the first scene in movie history to feature a laser beam.

Shirley Eaton gained film immortality as Goldfinger's loyal accomplice who falls for Bond. In her famous scene, Eaton gets painted gold by Goldfinger because of her betrayal. For years, untrue rumors persisted that Eaton died from the gold paint. Like Frobe, Eaton's dialogue was dubbed in, hers by Nikki van der Zyl. 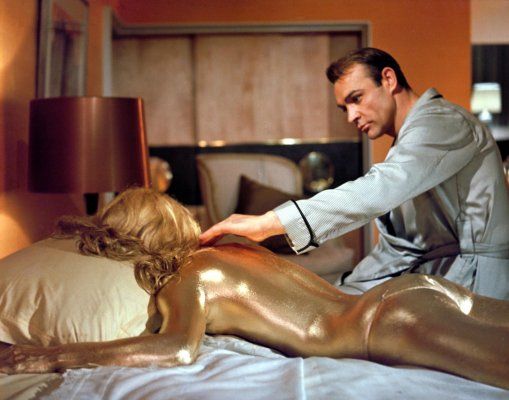 At the time of it’s original release (1964), Goldfinger became the fastest money-making film in history and was listed in the Guinness Book of World Records as such. The film made three million dollars in its first two weeks -a unprecedented blockbuster figure for the time. It won an Academy Award for Best Sound Effects.

On September 17, 1972, Goldfinger had its official television premiere and garnered the highest ratings of any movie in TV history. Goldfinger, a television rerun perennial and movie festival staple, holds up amazingly well and remains a cinema classic.