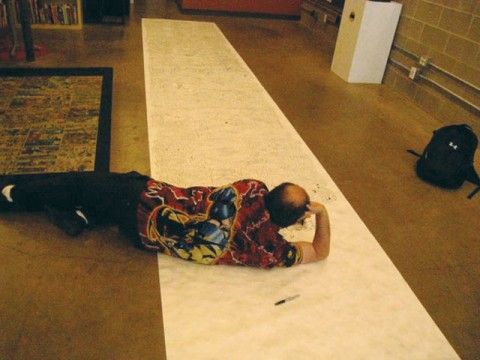 Joe Wos, a cartoonist, has long desired to get into the Guinness Book of World Records. As he neared his fortieth birthday, he formulated a specific record that he could set: the world’s largest hand drawn maze. Wos approached Guinness with his idea:

Guinness accepted Mr. Wos's proposal on condition that it be 10 square meters, or 107.6 square feet, drawn by him alone, with witnesses—five people are witnessing and signing off at regular intervals—and that it be solvable.

It is this last requirement that is preventing Wos from completing the record. No one wants to take up the laborious task of solving the maze:

“Let’s face it, it will be a pain,” acknowledges Mr. Wos, who estimates the task at 30 to 40 hours. There is also a slim chance he has inadvertently sealed the winning path. “I’m 99.4% sure it can be solved,” he says.

Link -via Nag on the Lake | Photo: The Nation