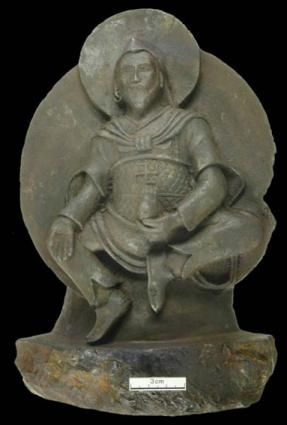 Ordinarily, I would change the headline from the original post, but this one certainly can’t be improved.

A statue of the god Vaiśravaṇa known only as the 'iron man' was (ahem) collected by Nazis from Tibet during an exhibition in 1938. This week, its origins were confirmed to be extraterrestrial: The Iron Man is almost certainly carved from a piece of the Chinga meteorite.

In a paper published in Metoritics & Planetary Science, the team reports their analysis of the iron, nickel, cobalt and trace elements of a sample from the statue, as well as its structure. They found that the geochemistry of the artefact is a match for values known from fragments of the Chinga meteorite. The piece turned into the ‘iron man’ would be the third largest known from that fall.

Given the extreme hardness of the meteorite – “basically an inappropriate material for producing sculptures” the paper notes – the artist or artists who created it may have known their material was special, the researchers say. Buchner suggests it could have been produced by the 11th century Ben culture but the exact origin and age of the statue – as opposed to the meteorite it is made from – is still unknown. It is thought to have been brought to Germany by a Nazi-backed expedition to Tibet in 1938-39. The swastika symbol on the piece – a version of which was adopted by the Nazi party – may have encouraged the 1938 expedition to take it back with them.

The Chinga meteorite was first recorded from remains discovered in 1918, though this sculpture obviously predates those samples. If the Iron Man is in fact carved from a remnant of the Chinga, it will be the only rock from outside Earth's atmosphere that has been carved into a human figure. Link | Photo: Elmar Buchner for Nature