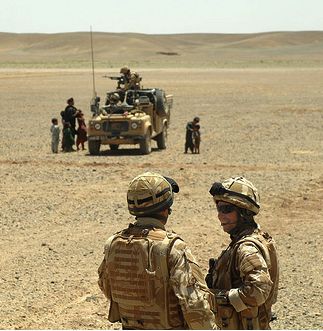 An unnamed British military gunner gave birth to a boy Tuesday in a field hospital at Camp Bastion, in Helmand province, one of the more dangerous parts of Afghanistan.

Britain’s Ministry of Defence does not allow troops to deploy on operations if they are pregnant, but the ministry didn’t know the woman was expecting.

It refused to confirm reports in the British media that the soldier didn’t know she was pregnant.

The mother and baby at Camp Bastion are both in stable condition in a field hospital, the ministry said.

A team from John Radcliffe Hospital in Oxford, England, is prepared to go to the base to care for mother and child, and they will be brought back to England. The baby was born only four days after a raid on the base by insurgents disguised as U.S. military. Link -via Fark