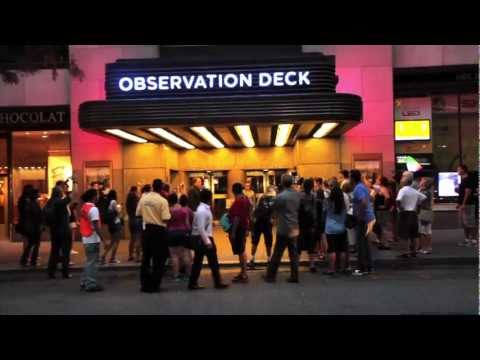 Brett Cohen? Sure, we know Brett Cohen*! Heck, we even knew him before
he got famous for pretending to be famous.

That’s right. Brett is just an average guy with a crazy idea that in
order to be treated like a celebrity, all one has to do is look like one.
Hey, it worked for Paris Hilton and Kim Kardashian, didn’t it?

On the night of July 27th, 2012, a huge prank was pulled in New York
City and this is the video of what took place. Brett Cohen came up with
a crazy idea to fool thousands of pedestrians walking the streets of
Times Square into thinking he was a huge celebrity, and it worked! Not
only did it work, it caused quite a stir. This social experiment, of
sorts, makes a profound statement about how modern culture is so attracted
to pop culture, without any real credibility needed.

He dressed up like a typical celebrity and was accompanied by an entourage
of two professional bodyguards, two assistants, and photographers pretending
to be paparazzi. While the assistants and photographers waited for Brett
to exit the 49th street marquee at NBC Studios, they started a buzz
that a "big star" was about to walk out, thus making it worth
their while to wait and get a picture. Many asked the crew whom Brett
was, and no answer was given. They were forced to either make something
up, or just take a picture with him in hopes that their Facebook friends
or Twitter followers might have a better idea.

As the crew walked over to Times Square, the crowds around Brett grew
on each consecutive block. Very few people even questioned who he was,
where he was from, or what he does. Brett took pictures with nearly
300 people before the stunt ended. The video even includes interviews
with people who had just taken a picture with Brett, and puts them in
an awkward position when they're asked questions such as, "Where
do you know Brett from?" and "What's your favorite movie he
was in?" Many of them were overwhelmingly excited over Brett's
walk through Times Square, and it showed.

Hit play or go to Link [YouTube]
– via The
Awesomer

*We have no idea who he is. Really.