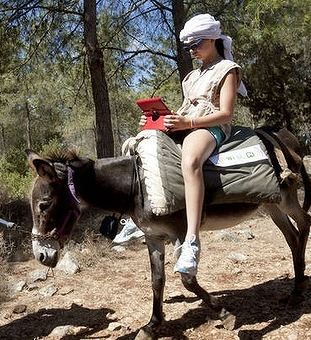 For it is written:

And the Lord activated the Wi-Fi signal of the ass, and she tweeted unto Balaam, What have I done unto thee, that thou hast smitten me these three times?

And so, 3,500 years later, the Kfar Kedem park in northern Israel maintains that tradition by offering visitors a look back into the past while connecting them to the modern world:

A device slung around the donkey’s neck like a feedbag is actually a wi-fi hotspot. […]

Visitor Peter Scherr accessed the Internet while touring the Galilee hills to do some donkey fact-finding with his family.

“It has been used as a working animal for 5000 years,” said the New York native, reading from a Wikipedia page on his iPad. “There are more than 40 million donkeys in the world . That’s a lot of donkeys!” [….]

“I don’t miss any news,” Scherr said. “I send pictures back to my family while I’m having fun on the donkeys.”