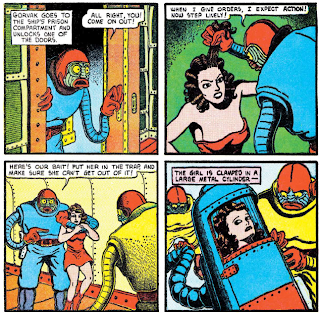 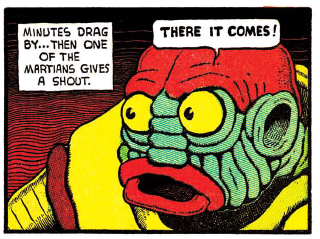 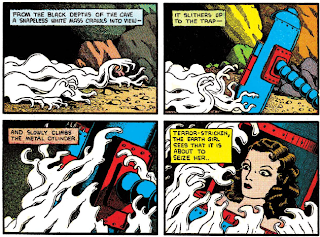 A few panels from the 26-page preview of a new collection of Basil Wolverton's Spacehawk:

Basil Wolverton is one of the greatest, most idiosyncratic talents in comic book history. Though he is best known for his humorous grotesqueries in MAD magazine, it is his science-fiction character Spacehawk that Wolverton fans have most often demanded be collected. The wait is over, as Spacehawk features every story from Spacehawk’s intergalactic debut in 1940 to his final, Nazi-crushing adventure in 1942.

Spacehawk is the closest thing to a colorfully-costumed, conventional action hero Wolverton ever created, yet the strip is infused with Wolverton’s quintessential weirdness: controlled, organic artwork of strangely repulsive aliens and monsters and bizarre planets, and stories of gruesome retribution that bring to mind Wolverton’s peer, Fletcher Hanks. Spacehawk had no secret identity, no fixed base of operations beyond his spaceship, and no sidekicks or love interests. He had but one mission in life: to protect the innocent throughout the Solar System, and to punish the guilty. He was a dark — yet much more visually playful — counterpart to Buck Rogers and Flash Gordon.

Spacehawk also includes the character’s final and rarely-seen Earthbound adventures. As the U.S. became involved in World War II, Spacehawk returned to 20th Century America to join the United States’ efforts in defeating fascism, which he does by patrolling the Earth’s stratosphere, looking for wrongdoing.

You can preorder the book for 42% off at Amazon.