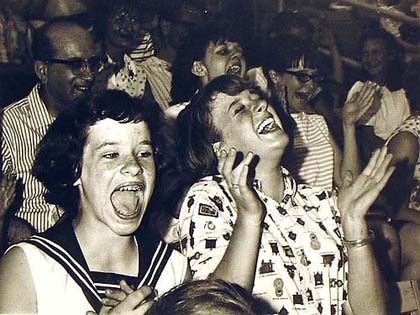 The following article is from the bookUncle John’s Bathroom Reader Tunes Into TV.

What if the studio audience isn’t laughing at what’s supposed to be funny? What if there isn’t a studio audience at all? There’s always “sweetening” -tweaking a program’s audio wth a laugh track or some other canned response. This is the story of “canned laughter.”

Laughter is contagious. That’s why radio comedies in the 1930s often employed studio audiences -their laughter showed listeners at home which lines were supposed to be funny, and make them think the show itself was well liked by many people. Television continued that tradition. The problem: Sometimes nobody in the live audience laughed, or they laughed at the wrong parts, or too hard, or for too long.

LAUGHING ON THE INSIDE

In the late 1940s, CBS sound engineer Charley Douglass came up with the solution for the problem of underwhelming audience responses: artificial laughter. Making fake laughter was fairly simple: create tape loops of ideal audience responses, then insert them wherever they were needed.

Douglass started collecting audiotapes of shows from the CBS archive. He listened carefully to them, analyzing why one laugh worked and another didn’t. Douglass soon noticed that laughter came in many varieties: An audience could titter slightly, chuckle, or roar. And then there was the timing: the instant laugh, the surprised laugh, the delayed one, and, with a particularly intelligent or obscure joke, the rolling laugh as members of the audience got the joke at different times. Douglass realized that dozens of taped laughs would be required.

Ideally, Douglass thought, the canned laughter should be hearty but not too loud, enthusiastic but not disruptive, and just long enough to not throw off the performers’ delivery. He aimed to make it consistent and reproducible, and realistic enough to augment and even replace an actual audience.

Douglass compiled his tape loops and programmed them into a device he called the Laff Box. And that’s all that’s really known about it: He was so protective of his invention that he wouldn’t even let his clients see it. From the accounts of those who caught a brief glimpse, it’s likely that Douglass was inspired by the Mellotron, am electronic instrument that looks like a keyboard, with each key playing a recorded sound stored on magnetic tape. (The Mellotron later became a favorite instrument of bands like King Crimson and the Electric Light Orchestra.)

Similarly, the Laff Box was probably a keyboard with a different kind of laugh attached to each key, and Douglass “played” it to match the right laugh to the joke or situation. The first show to employ Douglass and his mysterious machine: a short-lived 1950 NBC sitcom called The Hank McCune Show.

MAN IN THE BOX 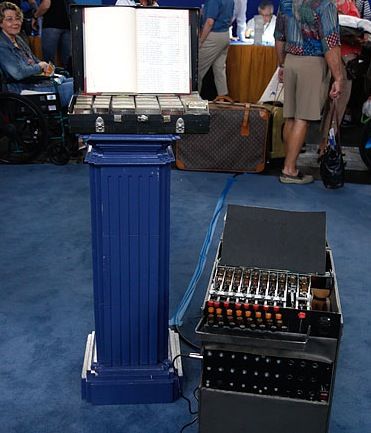 Here’s how Douglass worked: He’d arrive at a TV studio pulling a dolly that carried his machine in a padlocked box. The session would start with Douglass in an editing room watching the finished recording of the show, and the producer would dictate when to insert a laugh while Douglass took notes. After the meeting, Douglass would head into a room that could be locked from the inside. There, he would add the laughter. Nobody else was allowed to be present or watch him work.

Extensive analysis of the laughs Douglass added to shows indicates that each of his Laff Box keys could offer ten different variations of the same kind of laugh, and all of his recorded laughs were sped up slightly to pack in more laughter. Douglass could adjust the volume with a foot pedal so the response could begin with a burst, or with a rising wave, a split second after the joke and drop off in time for the next piece of dialogue.

Some shows required relatively subtle additions; others would add a laugh after nearly every line. Hogan’s Heroes was notorious for its overwhelming laugh track; The Andy Griffith Show, on the other hand, had a barely audible one. Douglass also added subtle audience noise- “uh ohs,” whoops and hollers, and wild applause greeting a star’s first entrance. It took him a full workday to “sweeten” a half-hour sitcom, for which he charged $100 ($800 in today’s money).

When Douglass was no longer allowed access to the CBS archive in 1955, he expanded his own collection, trying to get “clean” laughs that didn’t overlap with dialogue. One good source: a performance from mime Marcel Marceau’s 1956 American tour. He also relied on shows with nonverbal comedy sequences (tapes of which he got from the TV studios and production companies that made them), such as the mime-heavy The Red Skelton Show and the extended physical sight gag sequences of I Love Lucy.

Over the years, Douglass accumulated hundreds of laughs, freshening them every so often with new ones and reintroducing old ones that he’d retired years earlier. Aficionados of his work claim to be able to tell what year a TV episode was produced solely by the laugh track.

HOW SWEET IT IS

In the 1970s, Douglass’s monopoly was broken. One of proteges, Caroll Pratt, split off and formed his own company, Sound One, with new laughs that sounded more natural to some producers’ ears. Douglass retired in 1980, and in 1992 he was honored with a lifetime-achievement Emmy Award. He died in 2003 at the age of 93. Douglass’s work is carried on by his son Bob, but not with his dad’s Laff Box: Using what could more accurately be called the Laff Laptop, which contains hundreds of laughs accesible only through proprietary software, Bob does electronically what his father did with hand-cut recording tape.

The responsiveness of the new technology is such that sweetening is now routinely added in real time during the seven-second delay on live award shows, including the Emmys and the Academy Awards. Even live sports presentations are sweetened now, with augmented boos, gasps, and cheers from the crowd. As the saying goes, you can’t believe everything you hear. 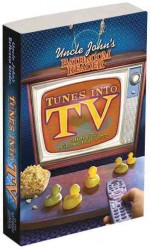 The article above was reprinted with permission from Uncle John’s Bathroom Reader Tunes Into TV. Since 1988, the Bathroom Reader Institute had published a series of popular books containing irresistible bits of trivia and obscure yet fascinating facts.

If you like Neatorama, you’ll love the Bathroom Reader Institute’s books – go ahead and check ’em out!