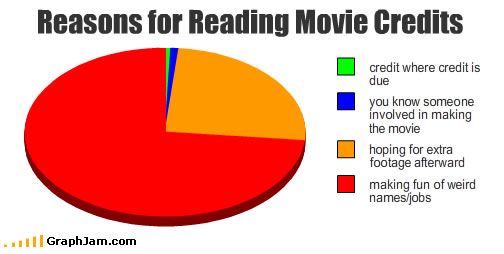 Do you ever read the credits for a movie? If you don’t, you’re missing some gems that pop up every now and then.

1. An American Werewolf in London (1981) had an end title congratulating Prince Charles and Princess Diana on their recent wedding.

5. The making of The Cotton Club (1965) involved so much litigation that the credits even included one for the law firm representing the successful litigants.

6. The Marsupials: The Howling III (1987) has a credit to the restaurant director for his Eggs Benedict. 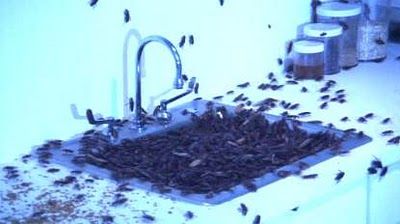 7. There is a credit for “Roach Wrangler” on George Romero’s Creepshow (1959). The film contains a scene involving thousands of cockroaches.

8. A title at the beginnign of Bill (1923) warned the audience that the film had no love interest and no mechanical thrills.

9. The Italian religious epic The Old Testament (1922), a silent movie, was released on America in three versions with three different sets of title cards: one for Protestants, one for Roman Catholics, and one for Jews.

10. During the early 1930s, supporting player Dorothy Jordan was always given star billing when her films were shown in her hometown of Clarksville, Tennessee, however minor the role.

11. Probably the only film which managed to spell its own star’s name wrong was in the credits to The Bit Part (1987), an Australian film, which billed topliner Chris Haywood as “Chris Heywood.”

12. “Fangs by Dr. Ludwig Van Krankheit” is an interesting credit from Dance of the Vampires (1967).

13. Night Patrol (1984), a typical ’80s comedy, has the end credits listed in French for some inexplicable reason.

15. The somber Australian melodrama In Search of Anna (1978) features a dog named Billy and has an end credit telling viewers that “Billy eats Loyal dog food.” 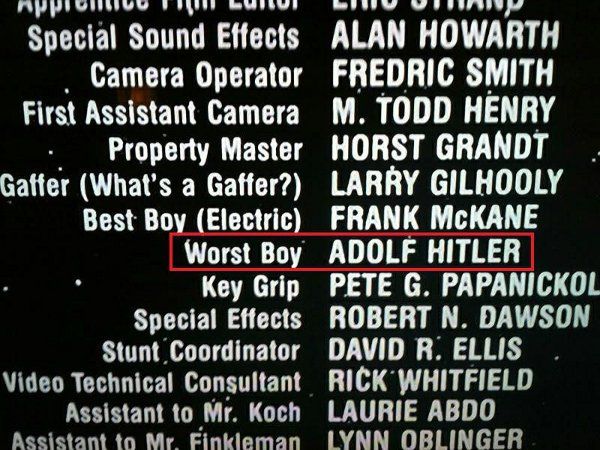