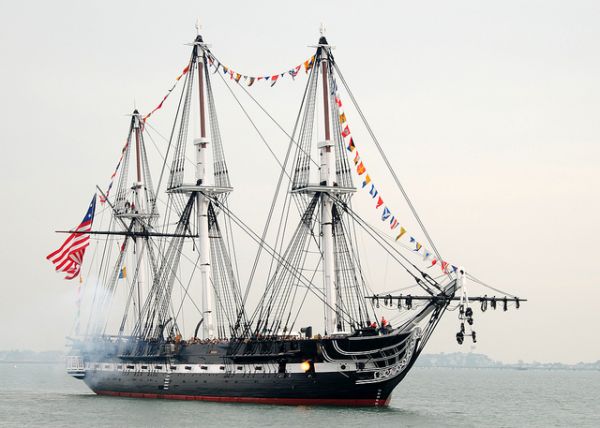 Launched in 1797, the frigate USS Constitution is the oldest vessel in active service in the United States Navy. Since 1881, it has sailed without the aid of tugs only once. Tomorrow, it will do so again to mark the 200th anniversary of its battle with HMS Guerriere:

During Sunday’s sail, the Constitution’s crew of about 65, accompanied by 150 sailors selected to be part of event, will unfurl four of its 36 sails, Neely said. The tugs will stand by as a precaution when the Constitution sails on its own. And the trip can’t happen unless the weather conditions are right.

The ship won’t move in winds less than five mph and anything over about 15 mph would put too much stress on the vessel, Neely said. But the forecast looks favorable.

The lengthy work in preparation for Sunday’s sail was largely on the Constitution’s aesthetics, though the masts were restored, Neely said. The crew also underwent extensive training on how to handle a vessel that’s unlike any other in the U.S. Navy.

Link -via MArooned | Photo: US Navy