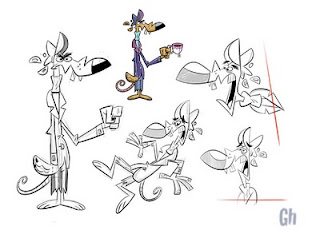 Well now that T.U.F.F. Puppy aired I can finally show a few things that I have been working on. This is one of Snaptrap’s evil Doom agents, he’s an English bloke named Ollie. On the advice of a co-worker I modeled him after the tall thin English character Horace from 101 Dalmatians. I did several very rough passes at him and Butch just picked one, with almost no changes it went off to clean up…that doesn’t happen often I must admit.