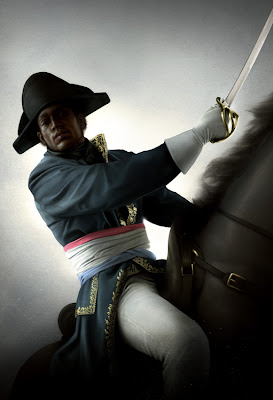 Tom Reiss’s The Black Count: Glory, Revolution, Betrayal, and the Real Count of Monte Cristo is the book to fill that Game of Thrones void in your life.  It's filled with enough Herculean warriors, rogue priests, cowardly kings, royal hostages, exotic locales and shocking reversals of fortune to make George Martin jealous.  And just like Martin's series, the good guys most definitely do not always win.

The book follows the life of Alex Dumas; born to a slave and a slumming noble father, he came of age during the French Revolution, and played crucial roles in Napoleon's conquest of Italy and Egypt, only to find himself imprisoned and largely forgotten in a fortress prison.  He lived long enough to father Alexandre Dumas, who eventually drew upon his father's and grandfather's lives to write The Count of Monte Cristo and The Three Musketeers.

What do I mean when I say it's like Game of Thrones?  Well, the horrors the French inflicted on each other during the Revolution seem like something cooked up by the Freys and Boltons:

In Nantes the army saved costly lead musket balls and time by organizing mass drownings.  As Thomas Carlyle described it, "Women and men are tied together, feet and feet, hands and hands; and flung in: this they call Mariage Republicain, Republican Marriage."  The Army of the West carried out most of its mass drownings using specially constructed barges that they floated into the middle of the Loire, loaded with approximately 130 victims each, and scuttled by opening special trapdoors designed for the purpose.

Napoleon outclasses Stannis in deceit and ambition when it comes to taking impenetrable fortresses:

Since the Middle Ages, the Knights had been based in Malta, which they turned into the most impregnable fortress island in Europe.  Would-be holy Knights showed up from everywhere, hoping to win fame and glory for God by fighting Islam in a sunny climate.  But the island was also a refuge for adventurous scoundrels of every variety, such as the Italian Renaissance painter Caravaggio, who, after committing murder, fled to Malta in 1607 and was made a knight in return for painting his masterpiece The Beheading of Saint John the Baptist.  (According to some sources, Sir Caravaggio then got into another violent altercation, with a fellow knight, and left Malta in disgrace.)

In spite of the order's vows, including chastity, Malta also became renowned for the beauty and laxity of its prostitutes, with the best ones going to the Knights and their guests.  And fighting the infidel on the high seas, they took in so many galley slaves and so much booty that they began to seem like a Christian version of the Barbary pirates.  The pope heard of the Knights' lax morals and sent an inquisitor to the island in 1574; he set up shop in a mansion in the shopping district.

And I wasn’t sure if I was reading about Egyptian history, or Daenerys and Slaver’s Bay:

the message Napoleon now imparted, that the French would be liberating Egypt from the tyrannical Mamelukes, a caste of hereditary foreign warriors who were originally slave-soldiers serving the local Egyptians.  (Like other "slaves" of the high Middle Ages, the Mamelukes were white, and to this day some of the elite families of Egypt have the pale skin and blue eyes indicative of that ancestry.)  The fearsome slave-soldiers had been imported by Egypt's rulers in the thirteenth century from the lands around the Black Sea and the Caucasas Mountains to enhance their power.  But the Mamelukes had then overcome their masters and seized control, until forced in turn by conquering Ottoman armies a few hundred years later to share power in a kind of uneasy partnership.

The Black Count is the cure for Game of Thrones withdrawal.  Currently 40% off at Amazon.