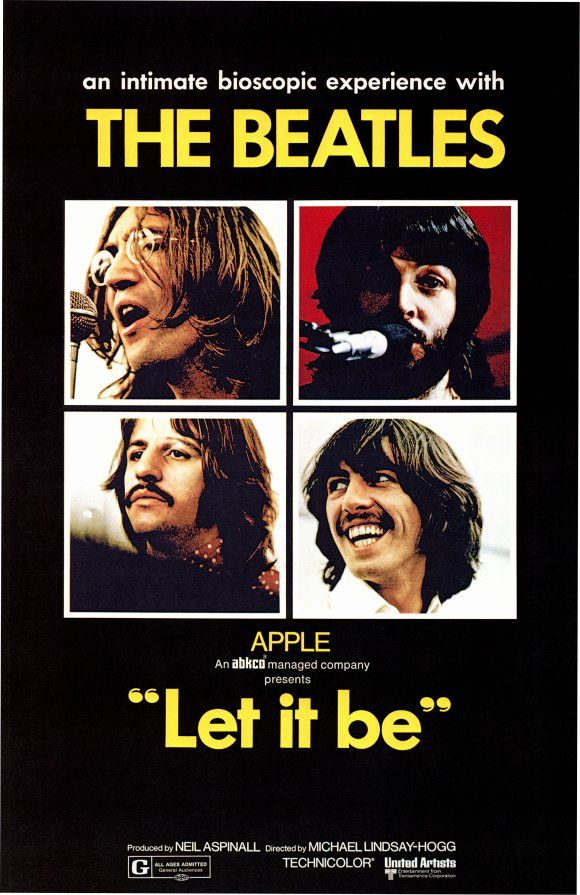 It was 1969 and The Beatles, although still brilliant as musicians and as a recording group, were on their last legs. But the band still owed one film on a long-ago signed contract with United Artist films. Let It Be was originally planned as a television documentary, but later became the contract-fulfilling film the Beatles needed to be over and done with it all.

By this time, John had found the great love of his life, the woman of his dreams, the enigmatic Yoko Ono, and the sad truth was he just didn’t care much about being a Beatle anymore. Also, John’s growing drug use, especially his current experimentation with heroin, definitely added to his growing disenchantment, paranoia, and hostility.

George’s attitude about being a Beatle was about the same -if not worse. George, at the point in time, was eager and anxious to get out from under the collective thumbs of John and Paul. Frustrated at always being the fifth wheel in the band as a composer, George was seemingly always taking a back seat behind the daunting combination of Lennon-McCartney. 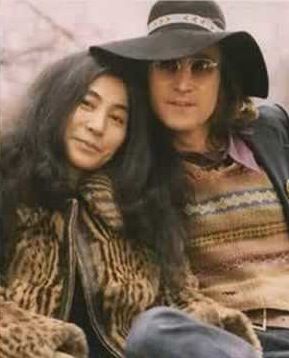 And George was not enamored of John’s beloved Yoko, either. In fact, in a moment of characteristic bluntness one day, George actually came up to Yoko’s face and told her she had “bad vibes” and tactlessly informed her that he really just didn’t like her at all. John later said he didn’t know why he didn’t punch George for his careless statements, but tellingly, he admitted he “still loved him.”

Ringo, as always the most easygoing Beatle, came along for the ride.

And Paul, seemingly the only band member who still cared about being a Beatle, became the group’s de facto leader, rallying the troops and getting the Fab Four in front of the cameras. In direct contrast to the lethargy and apathy of John and George, Paul seemed chipper, eager, and optimistic to make Let It Be a great Beatles project.

Filming began on January 2, 1969, at a chilly (literally and figuratively) Twickenham Studios. For the first few days, as John and George grumbled and complained, Yoko sat firmly by John’s side, almost as if they were conjoined twins. According to one witness, Yoko even accompanied John to the men’s restroom. Between takes of every song, John and Yoko would huddle up together to whisper, gossip, and giggle. This, of course, only added to the increasingly frosty atmosphere. 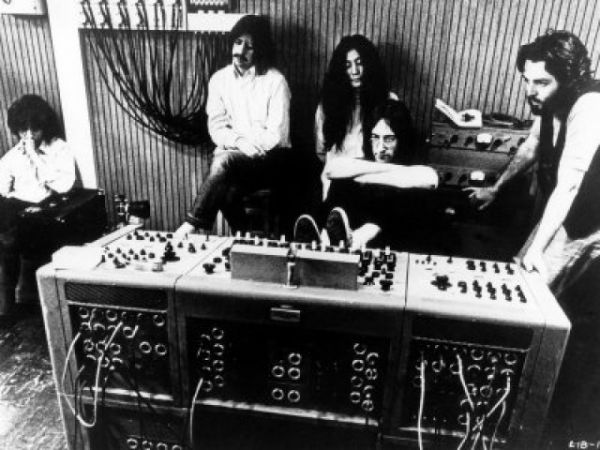 Paul’s criticisms and corrections of George’s guitar playing were slowly wearing away at George, until finally, perhaps the most interesting bit of the movie occurs. In one of the film’s most fascinating scenes, George, in a moment of quiet anger and frustration, says to Paul: “Look, I’ll play whatever you want me to play or I won’t play at all if you don’t want me to play. Whatever will please you, I’ll do it.”

“I seem to always be annoying you,” said Paul, as he tried to direct George.

George’s upset, anger, and frustration was growing every day and finally came to a head. Although most of this metamorphosis was played out in front of the cameras, only this brief snippet is actually included in the finished film. Finally, on January 10th, a fed-up George walked out, left, and quit the band -and the movie. “See you around the clubs,” George said as a parting comment to his three bandmates.

John unsympathetically said, “If he leaves we’ll just bring in Eric [Clapton] to replace him.” 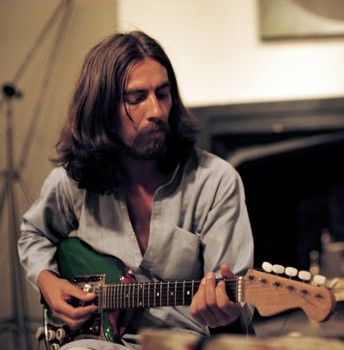 On January 15th, after a group meeting, George agreed to return to filming, on the condition that there would be no live concert in the movie and that filming would move to the warmer, friendlier confines of the new Apple Studios. According to George, the Let It Be sessions were “the low of all time.”

John said it was “hell …the most miserable session on earth.”

Yes, while Let It Be and its filming was definitely an unpleasant period for the band, a few brief moments of happiness do manage to shine through. In one scene, George watches lovingly as Ringo plays his new composition, “Octopus’ Garden” on the piano before the Beatles’ producer, George Martin.

We glimpse in George’s eyes, as he watches and helps Ringo along in the composition, the warm and loving look a proud father might give his son after the boy had just presented him with a good report card. It is worth noting that as much as John, Paul, and George could get down each other’s throats and battle, the love of the three for their drummer was almost always there. This may be George’s only genuinely happy moment in the entire film. 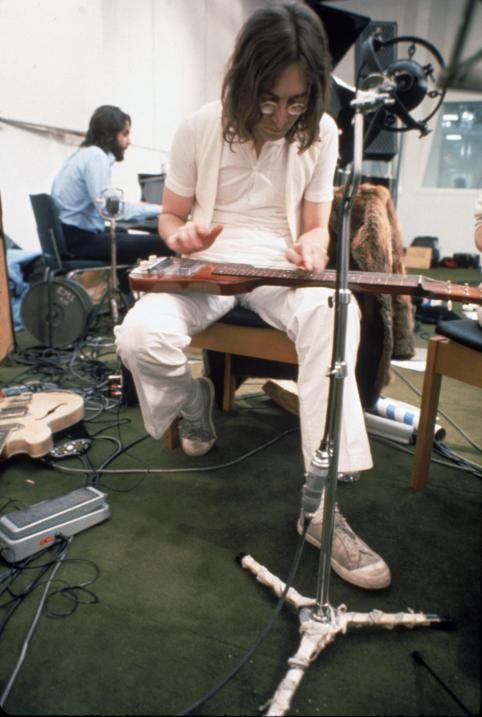 In another scene, as George plays his song “I Me Mine,” we see John and Yoko, touchingly if clumsily, waltzing around the room like two young lovers enthralled with each other.

In another, if not happy but very telling scene, we see Paul droning on and almost lecturing a very obviously bored John. As Paul talks on and on, John just stares, glassy-eyed, and nods apathetically. The scene seems to represent Paul’s gung-ho spirit and John’s almost total boredom and disinterest.

Upon returning, George brought an old friend, organist Billy Preston, in to accompany the band through the remainder of the filming on January 15th. This seemed to make the atmosphere friendlier for everyone.

The film’s climax is definitely the highlight of the movie. On January 30th, the four weary musicians (and Preston) trooped up to the roof of Apple Studios for what would be their last ever public performance. George had finally, if grudgingly, agreed to play live again. For 42 minutes, in mid-afternoon freezing cold weather, the Beatles ran through a half-dozen or so songs as a few friends, associates, and lovers sat and listened, along with anyone else who happened to be on the streets and shops of downtown London that historic day. 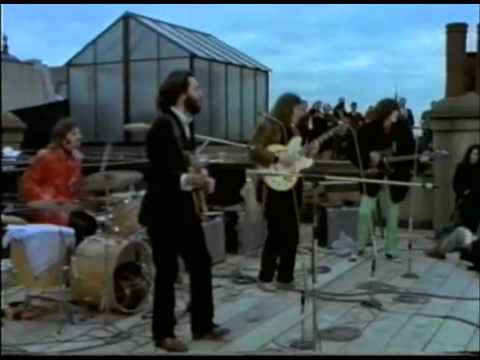 They sound great, as always, and one can even glimpse smiles of satisfaction on their faces during certain points in the impromptu concert, John’s and even the dour George’s. Perhaps they all knew in their hearts that this would be their swan song as a live band and, although freezing in the cold London weather, were enjoying the moment. Finally, a group of London policemen came up on the roof and politely informed the musicians that the noise was disturbing the peace and the impromptu concert must end. And so it did.

“Thanks, Mo,” Paul said as a walking off line to thank Ringo’s wife Maureen for her applause.

“I’d like to thank you on behalf of the group and ourselves and I hope we’ve passed the audition,” said John as a parting shot, drawing laughter from the small group of spectators. John was to sum up the whole Let It Be experience with emphasis: “It’s not that we didn’t like each other,” and went on to simply explain that the Beatles at the time were like a marriage or relationship that had simply run its course, and in the same sense, it was just time for all parties to just move on. 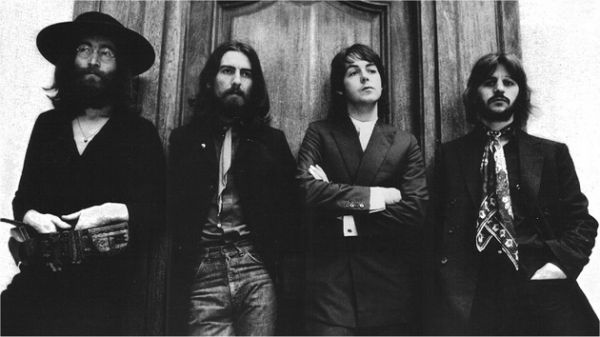 Let It Be had its official premiere in London on May 20th, 1970, over a year after filming had ended. By this time, all that was left of the Beatles was a few films, much TV footage, and some great memories …oh yes, and the greatest collection of music ever recorded.

None of the four ex-Beatles attended the Let It Be premiere. But a few weeks later, John and Yoko did go with another couple to watch an afternoon screening of the film at a local theater. As they watched the documented final, crumbling days of the Beatles in the near-empty theater, the two couples wept openly.