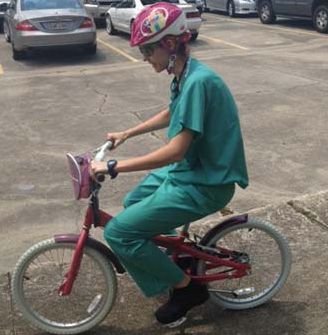 Dr. Catherine Baucom was on her way to the Elliot Mastology Center in Baton Rouge, Louisiana, where a patient was waiting for her to perform surgery on Wednesday morning. But an accident on I-10 created a huge traffic jam in which hundreds of cars were stopped. That’s when Baucom took matters into her own hands, creating a scene right out of a Hollywood movie. She recognized the neighborhood, and knew a colleague that lived nearby.

"Catherine called, she was outside my house.  She said 'Hey do you have a bike?'  I walked outside and said yea, its a kids bike," said Dr. Brian Barnett.  After a quick test run, Dr. Baucom decided the bike was her only choice to get to the hospital.  "I got the air pump out and aired the tires up as much as I could."

He gladly loaned her his seven year old daughter’s bike and helmet and the nearly six foot tall surgeon resumed her journey to the surgery center.

"It was hot pink and small," Dr. Baucom said, describing the bike.  "The helmet was pink with princesses."  He added he was laughing so much he couldn't get video of her before she peddled away.  "But she did utilize the plastic basket on front, to put her cell phone in.  Showed her experience with the bike."

She says she traveled down Tara Boulevard, onto Fairway Drive, crossed Jefferson Highway and over to Essen Lane.  When she reached I10, she was stopped by police.  After explaining the circumstances and where she was headed, she was escorted through to meet her patient.

The police couldn’t resist taking some video of the doctor. Link -via Fark