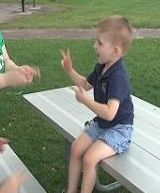 Three-year-old Hunter Spanjer is deaf and talks with his hands. In the S.E.E. (Signing Exact English) language, the gesture that means his name violates his school's weapons policy. Grand Island Public School wants Hunter to change his name so he won't have to use the sign.

Grand Island’s “Weapons in Schools” Board Policy 8470 forbids “any instrument…that looks like a weapon,” But a three year-old’s hands?

“Anybody that I have talked to thinks this is absolutely ridiculous. This is not threatening in any way,” said Hunter’s grandmother Janet Logue.

The sign may look a little bit like a gun, but Hunter’s name is a slightly modified sign to designate it as his name, in which he crosses his fingers. His fingers still look too much like a gun for school authorities. The National Association of the Deaf has been notified, and is expected to send lawyers to talk to officials from the school. Link  -via Boing Boing