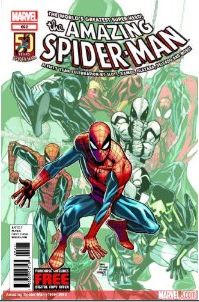 The Amazing Spider-Man #692 is the 50th anniversary issue of the Spider-Man comic books. To honor the occasion, Spider-Man, whose alter ego Peter Parker is now a scientist in his 30’s, gets a teenage sidekick. It’ a big step that shows how far the character has grown from his roots as a shy teenager that readers could identify with.

Peter was a nerdy loner who was nervous around girls and hid his insecurities not only with a real mask, but also by cracking jokes. For angst-ridden and self-centered boys who often feel as though the cosmos align just to make their lives suck, it was an easy sell. The campaign slogan for Spider-Man, “With great power comes great responsibility,” is heavy, but also what moms tell their kids about taking out the trash.

Spider-Man has always been young. The core myth of a teen geek with superhuman abilities, learning to sacrifice for the greater good while wearing the best costume in comics, has endured. He’s been amazing, spectacular, astonishing, sensational, and whatever other superlative you tack on. But he’s never really been middle age.

Now he is. Spidey might not have a unitard-stretching gut or arthritic knees, but he hit the half-century mark this month. And in Marvel Comics’ anniversary issue, he gets a sidekick. Can we still enjoy Peter’s coming-of-age struggles with responsibility when we know he’s been through it for decades? The webhead may finally have met his ultimate foe: age.

Read an analysis of what reaching 50 years might mean for Spidey at The Daily Beast. Link