A couple weeks ago, I promised a couple interviews with members of the JPL Curiosity Rover team. Today we start with attitude control engineer Steve Collins, who’s been working for NASA for the last 20 years, starting with the failed Mars Observer orbiter, launched in 1992. Since that time, JPL has been responsible for numerous successful Mars missions, Curiosity, of course, the latest and greatest.

If you’ve been living under a rock the past couple months, here’s the quick recap: Late last November, Curiosity was set off on an 8 1/2-month, 354 million-mile journey to Mars. She’s the largest rover ever sent to the Red Planet, about the size of a Mini Cooper, plutonium powered and packed with all kinds of goodies to perform science experiments once landing safely on the surface of Mars. On August 5th, 2012 (Pacific Time), she successfully landed after completing the dangerous 7-minute entry, descent and landing which involved busting through the Mars atmosphere at about 13,000 MPH, a ginormous parachute to help slow it down and some down-firing booster rockets to bring the rover finally to a soft, safe landing.

Attitude control engineer Steve Collins was a key member of the team that flew the spacecraft to Mars and helped keep it pointed in the right direction, making small adjustments over the 8.5-month journey to make sure NASA hit their target, a spot close to the mountain range called Mount Sharp, which geologists on the team think will help them uncover more history about the water thought to have once flowed over the surface.

Steve was super generous with his time and gave the following interview over the course of about 30 minutes. 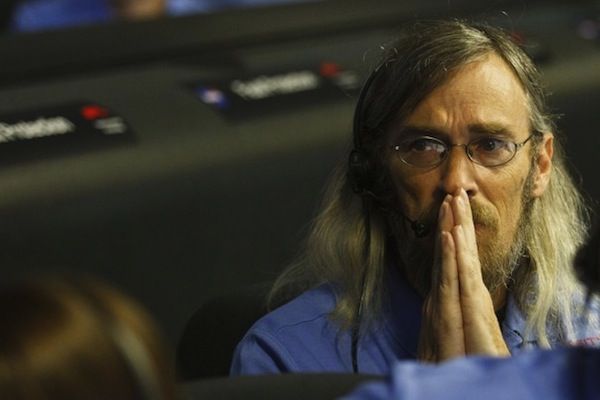 Grew up: in SoCal, watched the Apollo landing on TV with great interest and attended North Hollywood High School

While growing up: His parents fed him a regular diet of books about space

DI: Did you always know from an early age that you wanted to work with rockets?

SC: In high school I decided I’m pretty good at science but I wanted to diversify, so I took an acting class and a class in drama and started to get interested in that. When I was selecting colleges, I looked for places that had a theater department and an astronomy program because I was torn between astro physics or something like that and theater at that time.

DI: So after college, did you go directly into rocket science or…?

SC: My father worked in the motion picture business (he was a cinematographer) so I worked in the industry for a while doing camera work and stuff like that. So after I graduated college, I went and did that for a while. I didn’t pursue acting professionally but have continued to do amaterur theater or underground theater my whole life.

I saw an ad in the newspaper for a position with a small aerospace company that I pursued. It turned out that I had taught myself the right computer programming languages on my Commodore 64 (6502 Assembler) just because I was curious about it but also I used it to do simulations for my Bachelor’s degree thesis in physics, which was around orbital mechanics and stuff. And so they needed someone to program an Apple II, which uses the same processor and they saw I was interested in physics and space stuff so they hired me. I worked there for 10 years.

There I learned how to do engineering and went to Colorado to support 13 GPS spacecraft launches and got a taste of spacecraft operations. So that became the right stuff on my resume to get a job at JPL doing an operations job.

DI: What was your first job at JPL?

SC: I flew the Mars Observer all the way to Mars but then we lost the spacecraft right at the end, which was a disappointment, but then I went on to a whole series of 6-8 projects here at JPL that were successful. I worked on the MER Rovers, Spirit and Opportunity, I’ve done four or five different comet flyby missions which were interesting and fun.

DI: What was going through your mind when you knew you’d actually successfully landed Curiosity on Mars? 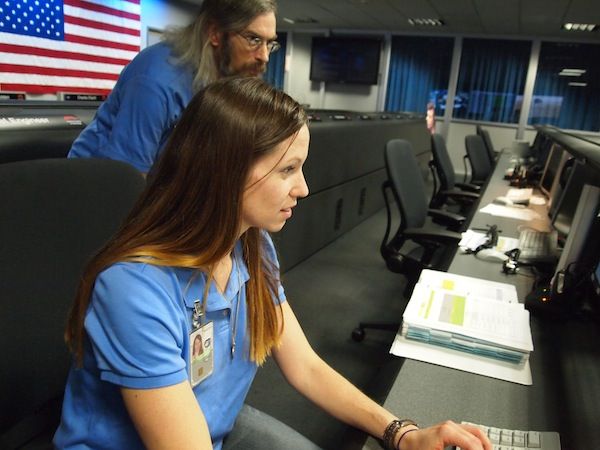 SC: For me, personally, the thing I was thinking about was all the people who worked on the project over the years. It’s been 10 years or more in the making and thousands and thousands of people have worked on it, many of them putting in 60 and 80 hour weeks. All of these pieces have to come together and all of it has to work exactly right for the rover to land safely on the surface, which, of course, is reflected in the price tag–that’s a measure of how many people participated. EDL [entry, descent, landing] is a moment where the whole thing can be, not quite for naught, but basically done if we crash. And so, there’s just a lot of relief in that. I’ve studied geology a little bit and I appreciate the science that Curiosity is going to be able to do–the amazing stuff we’re going to learn about Mars over the next couple years. So along with everybody’s effort and the money, and the reputation of the lab, and this institution where I’ve worked for 20 years, the potential loss of that science is hanging in the balance.

DI How does it make you feel that this robot that you worked on here in Pasadena is roving around a planet hundreds of millions of miles away?

SC: Yeah, it’s freaky. (laughs) It’s freaky to realize that that pile of hardware that was in the high bay right over here just months ago is now sitting on the surface of Mars.

DI: Now that the bulk of your work is done with Curiosity, what are you working on now?

SC: There’s a bunch of exciting missions coming up for JPL. There’s returning samples from the surface of a comet. There are missions that are going to be pre-cursors to human spaceflight to go to small bodies like near-earth asteroids. There’s talk about missions to go to Titan and do stuff on the surface of Titan’s oceans, which are made out of methane. There’s a mission to explore Europa. Someday we’ll be able to drill down through the ice of Europa down to the liquid water ocean. So there’s lots of amazing stuff still to explore in the solar system. A lot of fun stuff still to do.

[Be sure to tune in next week for an interview with Erisa Hines, pictured with Steve above.]