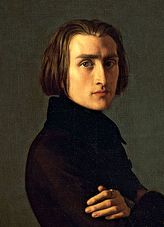 In the 20th century, we became used to seeing hoards of girls excitedly screaming over a musician: Frank Sinatra, Elvis, the Beatles …all the way to Justin Bieber in the 21st century. But the phenomenon did not start with Frankie; musician-mania just became better publicized in the modern era.

In the year 1842, five years into the proper Victorian Era, and that's when Lisztomania swept the land. [Hungarian musician Franz] Liszt was 31 years old the year he landed in Berlin. He'd established a new mode of performance — the solo piano recital — and new kinds of non-narrative music that people compared to musical poetry. He also developed a violent playing style that broke strings and sometimes brought down entire pianos. The Berliners were enchanted. At his concerts, they worked themselves up to screaming, fainting ecstasies. Women followed Liszt down the street and picked up his old cigarette stubs, made bracelets from his broken piano strings — and tried to rush him en masse, and pull out or cut locks of his hair. The craze spread outward from there, getting Britons and Italians as Liszt moved around.

Read more about Liszt and his fans at io9. Link