Let's take a look at some of the most famous mustaches in history …and their owners. 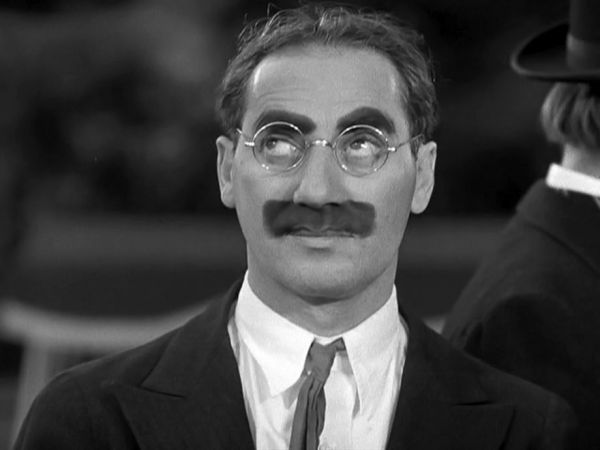 Groucho was the greatest and funniest comedian in movie history (at least in my humble opinion). Groucho always wore a fake crepe mustache in the Marx brothers act during their early years in Vaudeville. But one day he was late for a performance and, in a hurry, he just slapped on some greasepaint instead. The laughs came in, just as usual, so Groucho decided to stick with the easier-to-apply greasepaint.

When the boys hit the movies, the studio executives wanted Groucho to get a real-looking mustache. But Groucho stuck with the obviously-fake greasepaint and audiences all over the world never seemed to care. The Marx Brother were always surreal anyway, and the fake mustache seemed to fit right in.

It was only in the very last Marx Brothers movie Love Happy (1949) that Groucho finally sported his real facial hair. 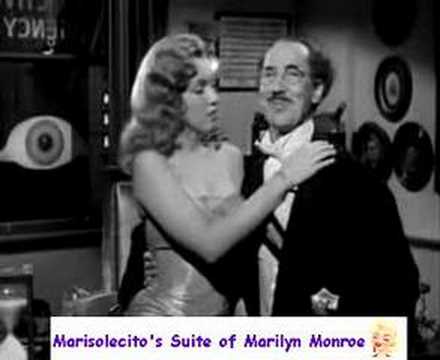 Although every movie fan thinks of Clark Gable with his trademark mustache, he did several films early in his career sans the ‘stache. It wasn’t until 1932’s Strange Interlude that Gable first made the ladies swoon with his new mustache. Gable’s own personal favorite of all his films, Mutiny on the Bounty (1935) features a clean-shaven Clark Gable. He was nominated for an Oscar for the role, too.

But after the mustachioed Rhett Butler swept Scarlet O’Hara (and a few million other ladies) off their collective feet in Gone With The Wind in 1939, the idea of Gable without a mustache became utterly unthinkable. 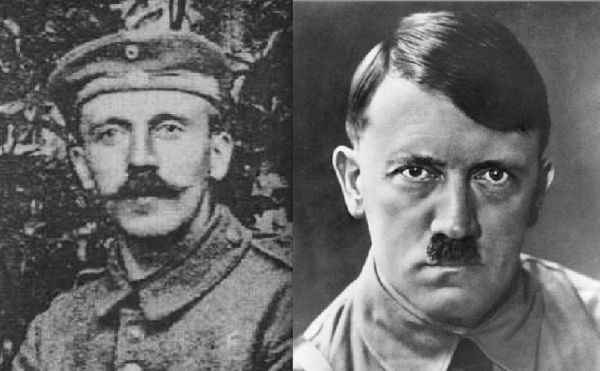 If ever a single fashion idea quickly became unpopular, it was the “Hitler mustache.” Early on in his life, in his twenties, young Adolf sported a full walrus-like mustache. Hitler sported the much-bigger mustache as a soldier in the trenches in World War I. So why did he switch to the weird little toothbrush mustache?

There is a school of thought that Hitler wanted the little ‘stache because Charlie Chaplin, then the most famous man in the world, had the same one. Hitler was advised not to grow it, that is was “not the fashion.” With typical arrogance, the young future-fuhrer replied, “It is not the fashion now, but after I wear it, it will become the fashion.”

Yes, even cartoon character Fred Flintstone grew a mustache, twice, actually. In both The Flintstones episodes “Latin Lover” (1962) and “Fred El Terrifico” (1964) Fred grows mustaches. Also in both episodes, Fred becomes irresistible to women and Wilma gets jealous. If I’m not mistaken, there were the only two occasions these two events occurred. 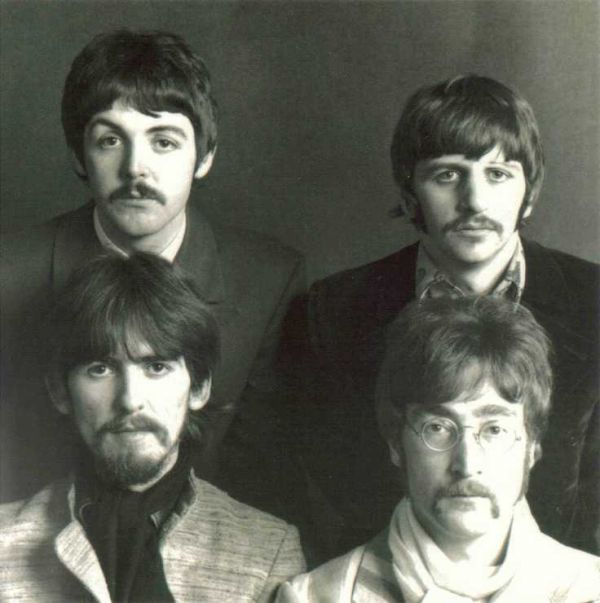 Paul McCartney became the first Beatle to grow a mustache, after a moped accident on December 26, 1965. Paul split his lip open in the crash, in which he smashed his face on the pavement, and he grew a mustache to hide the resulting scar over his lip.

George Harrison grew his first mustache in the summer of 1966 (after the Beatles had stopped touring) when he wanted to be “disguised” on his visit to Bombay to study the sitar with Ravi Shankar.

Ringo had actually sported facial hair, a sleek little beard and mustache, before joining the Beatles in 1962, but he was told to shave it off upon joining the band. He had played for three years with a local band called Rory Storm and the Hurricanes before becoming a Beatle. Ringo has almost always had facial hair since the mid-sixties (he hates shaving).

John grew his first handlebar mustache late in 1966 during the recording of the album Sgt. Pepper’s Lonely Hearts Club Band. 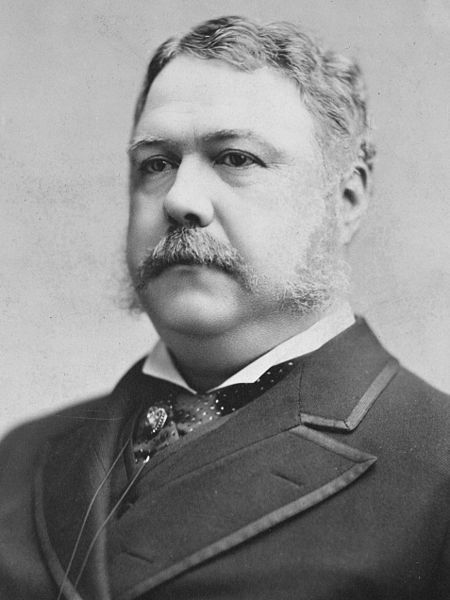 Although everyone knows Abe Lincoln had a beard, he never grew an accompanying mustache. Interestingly, Lincoln was clean-shaven at the time of his first election. He grew his trademark beard because an 11-year-old girl named Grace Bedell advised him to in a letter. But let’s get back to the subject at hand: mustaches. Republican Lincoln ran against mustachioed Democrat George McClellan in 1864 (Lincoln, of course, won. But he only lived six weeks into his second term.)

The first mustachioed president was our 18th president, Republican U.S. Grant. Of course, he had a beard, too. It wasn’t until Chester A. Arthur became president in 1881 that we had a “mustache but no beard” prez. Arthur was a rare mustachioed Democrat president.

1904 was the last time the two opposing presidential candidates each had a mustache: Republican Teddy Roosevelt vs. Democrat Alton Parker.

1908 was the last time a man won the U.S. presidency with a mustache (or any facial hair). Republican William Howard Taft, he of huge girth and appetite, was our last mustache-bearing president.

Yes, the GOP definitely has been the more facial-haired party in presidential history. But in 1948, the Republicans nominated Thomas Dewey, the last mustachioed presidential candidate, to run against Democrat incumbent Harry S. Truman. It is reputed that Dewey’s facial hair may have cost him a few precious votes in the close election, and no presidential candidate has sported a mustache since. 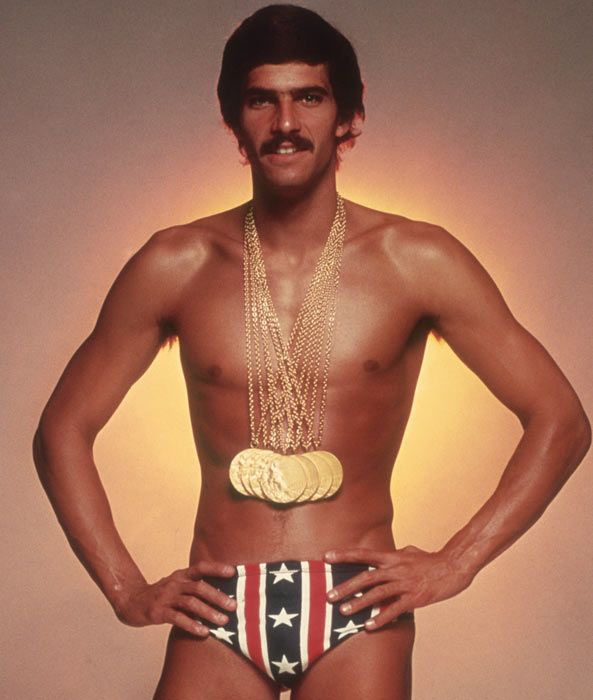 Okay, we all remember the great joke in the movie Airplane! where a passenger wants some “light reading” and the stewardess gives him a super-thin book called Famous Jewish Sports Legends. Well, Mark Spitz made all us Jews proud at the 1972 Olympics by winning a then-record seven gold medals -and setting seven world records, too!

It was, and is, very unusual for an Olympic swimmer to sport a mustache. In contrast to Mark’s facial hair, most swimmers would shave all hair off their bodies because of the hair’s potential “drag.” When Spitz was asked about the mustache, he said it “helped create a pocket of air to breathe.”