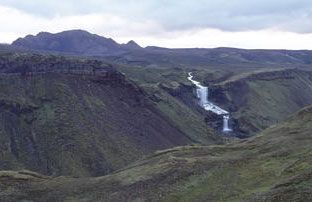 A bus driver alerted police and emergency personnel when one of the tourists on his sightseeing tour went missing. The excursion to Iceland's Eldgjá volcanic canyon was put on hold for hours while a search was carried out. A helicopter was even summoned for the search-and-rescue operation.

However, the search was called off at 3 am when it turned out that the missing woman had been on the bus all along and even participated in the search for herself, mbl.is reports.

Before reentering the bus after the stop at Eldgjá, the woman had changed her clothes and freshened up, resulting in the other passengers not recognizing her.

According to information from the Coast Guard, a helicopter was ready to be sent to the area to assist with the search but the plans were put off due to foggy conditions. Around 50 people participated in the search on vehicles and by foot.

The unidentified woman hadn’t recognized herself in the description of the lost woman, as her clothing had been recalled incorrectly. Link -via Boing Boing