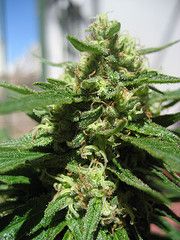 A jail in western France allowed prisoners to maintain a garden to grow their own food. Alas, the prisoners decided to diversify their crops:

The plants, which had reached a height of around 80cm (two and a half feet) before being spotted at the weekend, were found in vegetable patches located in the exercise courtyard of the Saint-Martin-de-Re prison in the west of France, Christophe Beaulieu, a regional official of the prison officers’ union, told AFP.

“When you don’t know what you are looking for it is easy to confuse them with other plants,” Beaulieu said.