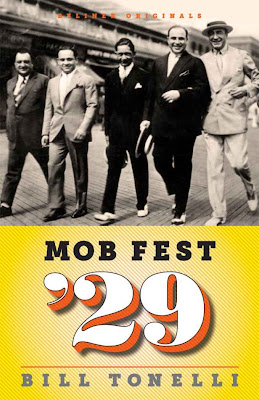 In this brilliantly subversive work, Bill Tonelli investigates the long-standing myth of the mob’s founding—a legendary week in May 1929 in which a who’s who of American crime, led by Al Capone, are said to have assembled in Atlantic City, New Jersey, to make peace and divvy up the country’s illegal enterprises. But what really happened that criminally star-studded week? Tonelli sifts the facts from the malarkey, and in so doing reveals how and why the cops, the mobsters, and the writers who love them prefer not to get their stories straight. Mob Fest ’29 combines the thrills of a mostly true crime story with the madcap scholarship of a savvy Mafia investigator.

I have one digital copy to give away. For a chance to win, simply comment on this post and include your email so I can contact you if you win. One comment per person, and this contest is open worldwide. I’ll pick a winner this evening.