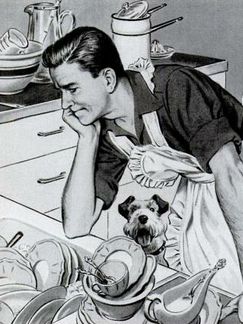 A Norwegian study called “Equality in the Home” found that couples who split housework are 50% more likely to divorce than couples in which the woman does most of the work. And the more housework the husband does, the higher the divorce rate climbs. However, guys, that does not mean that if you quit helping out, your marriage will improve.

Researchers found no, or very little, cause-and-effect. Rather, they saw in the correlation a sign of “modern” attitudes.

“Modern couples are just that, both in the way they divide up the chores and in their perception of marriage” as being less sacred, Hansen said, stressing it was all about values.

“In these modern couples, women also have a high level of education and a well-paid job, which makes them less dependent on their spouse financially. They can manage much easier if they divorce,” he said.

It is also worth noting that in Norway, no matter how the housework is split, both parents tend to share childrearing duties equally. Link -via Breakfast Links