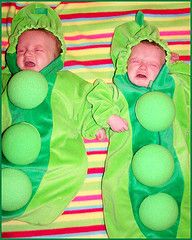 What happens when a crime is committed and the suspect blames it on an identical twin? The fact that they look alike throws a monkey wrench into eyewitness accounts, and their DNA is identical, too. Often such cases -and there are plenty of real-life cases- end up with no one convicted. But that might change with new advanced chemical tests that delve even further into a twins genetic makeup.

A new kind of genetic evidence may come to play a role in these cases. Epigenetics refers to chemical modifications to DNA that may change how genes are expressed. A study released earlier this year showed that the epigenetic profiles of identical twins differ at birth, presumably because of small differences in the twins’ uterine environments. While no prosecutor has yet used epigenetic evidence to distinguish a guilty twin from his innocent sibling, the findings should put would-be criminal twins on notice.

Being an identical twin was never a “get out of jail free card,” anyway. Don’t do the crime, because science will eventually catch up with you. Link -via Smithsonian