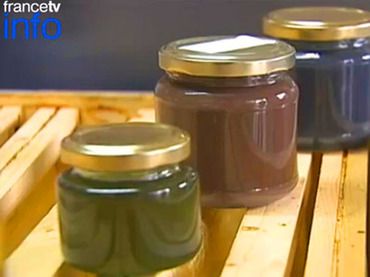 It looks like a rack of homemade candles, but the image above is actually of honey produced by bees in France. The weird coloration started showing up in August, and beekeepers were stumped. A bit of detective work revealed that the cause wasn’t very far from home.

The bees around the town of Ribeauville in the Alsace region have been carrying an unidentified colored substance back to their hives since August. The keepers have done a bit of sleuthing and think the Agrivolar biogas plant around 4 kilometers away is to blame.

The enterprise has been processing waste from a Mars factory producing the colored M&M's. The waste products have been stored in open containers and the bees could easily access the contents.

“We discovered the problem at the same time they did. We quickly put in place a procedure to stop it,” Reuters quotes Agrivalor manager Philippe Meinrad as saying. The plant said they would now store waste indoors and in tightly closed containers.

Though the off-color honey still tastes like honey, store-owners have said it's not definitely not going to sell like the familiar, non-M&M-colored honey everyone is used to. Another concern is the bee colonies' ability to withstand exposure to such high levels of artificial coloring. Link