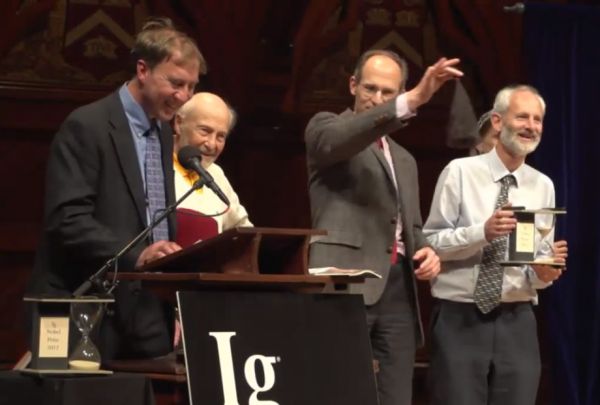 The Ig Nobel Prizes were awarded last night in a ceremony at Harvard’s Sanders Theater. One of the awards was a wedding gift for the researchers! The Psychology Prize went to Dutch researchers Anita Eerland and Rolf Zwaan, along with their colleague Tulio Guadalupe, for their study “Leaning to the Left Makes the Eiffel Tower Seem Smaller.” Eerland and Zwaan’s wedding is tomorrow. Some of the other winners:

ACOUSTICS PRIZE: Kazutaka Kurihara and Koji Tsukada [JAPAN] for creating the SpeechJammer — a machine that disrupts a person's speech, by making them hear their own spoken words at a very slight delay.

PHYSICS PRIZE: Joseph Keller [USA], and Raymond Goldstein [USA and UK], Patrick Warren, and Robin Ball [UK], for calculating the balance of forces that shape and move the hair in a human ponytail.

FLUID DYNAMICS PRIZE: Rouslan Krechetnikov [USA, RUSSIA, CANADA] and Hans Mayer [USA] for studying the dynamics of liquid-sloshing, to learn what happens when a person walks while carrying a cup of coffee.

MEDICINE PRIZE: Emmanuel Ben-Soussan and Michel Antonietti [FRANCE] for advising doctors who perform colonoscopies how to minimize the chance that their patients will explode.

But that’s just a few of the awards. You can read the entire list at Improbable Research. Pictured above are the winners of the Physics Prize. Link

You can also see a video of the entire ceremony. Link