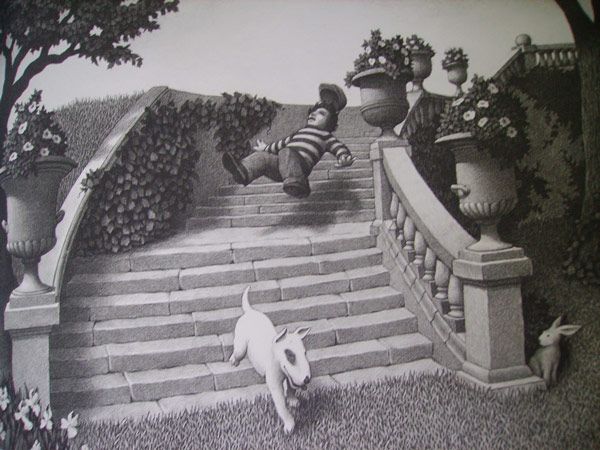 Artists, filmakers, and authors often get into the habit of leaving a “calling card” -some quirky element that they’ve grown fond of- in many of their works. If you learn which ones are which, and you’ll be able to identify their works even when their name is not attached. Or you might just enjoy being able to spot one. For example: Chris Van Allsburg’s books always had Fritz in them somewhere.

As a kid, this writer had a full collection of Van Allsburg’s books, and always made a game of finding Fritz, a little white bull terrier with a black spot over one eye (“a most unusual and appealing dog”) hidden in each one — sometimes as a real dog, sometimes as a toy or picture or other artifact. Fritz is based in part on Winston, a real-life dog owned by Chris Van Allsburg’s brother-in-law, who “had an accident that sent him to the big dog kennel in the sky at an early age.” Aw.

Ten such artists and their calling cards are explained at Flavorwire. Link